Alopecia is a common condition which adversely affects the quality of life. There are several causes which are primarily cicatricial or noncicatricial. It is not always possible to make an accurate and quick diagnosis from clinical examination only. Invasive methods, such as scalp biopsy or painful clinical tests like hair pull test may be required. Under such circumstances, dermoscopy is useful in the form of a noninvasive tool to diagnose different types of hair loss. It is also used to assess prognosis, monitor treatment response, and selecting the ideal site for biopsy, if required.

Trichoscopy is the microscopy of skin of scalp and hair at its surface. This term was first coined by Lidia Rudnicka and Malgorzata Olszewska in 2006.1 It can be achieved by a handheld dermascope or a video dermascope. The magnification attained varies from 10 to 50 times or higher depending upon the instrument used.2 The part of hair follicle above scalp surface and the perifollicular epidermis is examined by this method.

Four basic structures on the scalp are analyzed using a dermoscope. They are hair shafts, hair follicle openings, perifollicular epidermis, and blood vessels. A normal scalp in type IV or V skin shows 2 to 4 terminal hairs emanating from a single follicle with a brown reticulate or honey comb pigmented network over the scalp. Single and double hair units are found in temporal scalp, whereas triple hair units predominate in the occipital scalp (Fig. 1).3

Hair shafts are described with respect to their thickness and pigmentation along their length, fractures, and shape changes, such as node, curls, and twists. Normally, a terminal hair appears as uniformly pigmented and thick. Vellus hairs which are about 10 percent of all follicles appear as short, less pigmented, and thinner. Regrowing hairs are pigmented as that of terminal hairs and have tapering ends, thus being differentiated from vellus hairs.4 Follicular openings are seen and described as dots in dermoscopy. The dots are of various colors. The pigmented hairs that are broken at the scalp surface appear as black dots. Yellow dots represent the empty follicular openings that contain sebaceous materials. White dots, if irregular and bigger, represent a perifollicular fibrosis and if regular and smaller, do correspond to eccrine gland openings. Red dots are seen in discoid lupus erythematosus. Dirty dots, seen as brown, black particulate dots, and loose fibers are caused by nonmicrobial environmental particles. These can be easily removed after shampooing and are normally seen in healthy children.5 Perifollicular epidermis findings include scaling, differences in color and surface characteristics of scalp skin, and presence of any discharge. Blood vessels are also evaluated in dermoscopic examination. Their arrangement is of importance to diagnose inflammatory conditions or scarring alopecia. 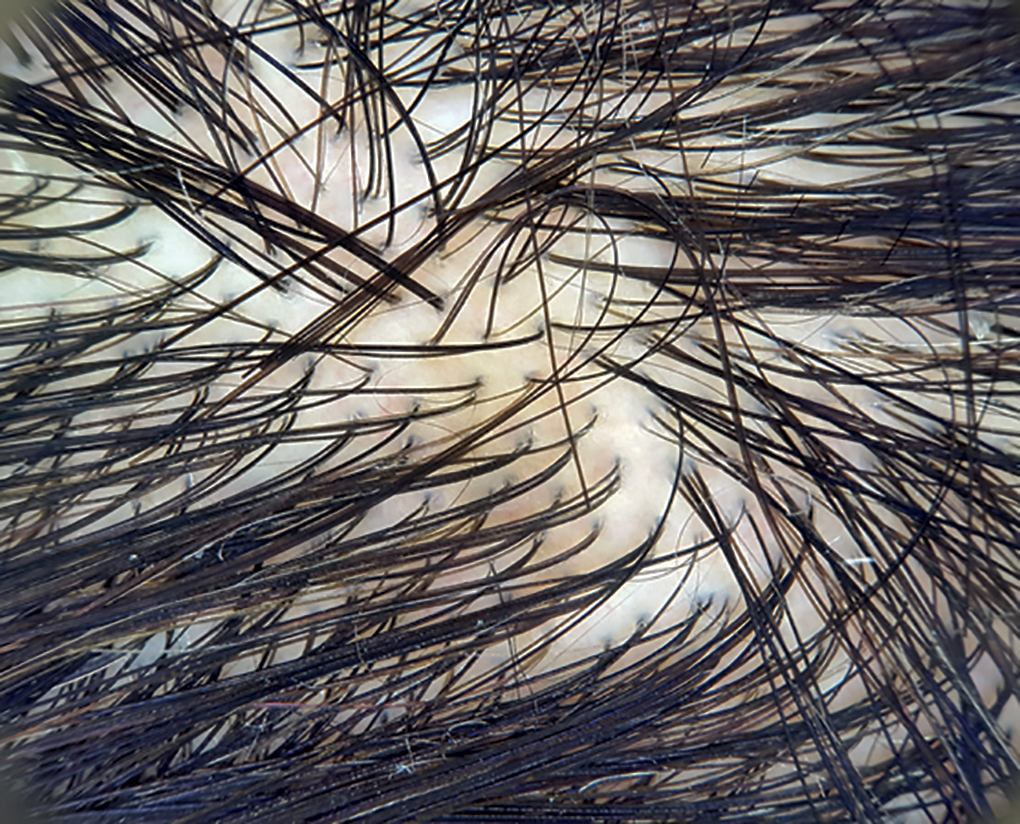 It is a type of alopecia resulting from loss of the immune privilege of the hair follicle, thereby causing autoimmune destruction of the later. Sudden onset of complete patchy hair loss is the commonest presentation (Fig. 2).

Yellow dots: These are regularly distributed and represent the hair follicles that contain keratosebaceous material.

Black dots: These represent the pigmented hairs which are broken at the scalp surface.

Regrowing hairs: These are short and vellus hairs. These regrowing hairs may appear as regularly coiled, described as pigtail hairs. There is an irregular coiling of hair seen in case of trichotillomania.

Coudability sign: It is a terminal hair with a kink at its proximal end. This is considered as sign of disease activity and can be a substitute for the hair-pull test.6

Short vellus hairs and yellow dots are the sensitive marker of alopecia areata.

Black dots, cadaverized hairs, and tapering hairs are the most specific findings and correlate with disease severity.7 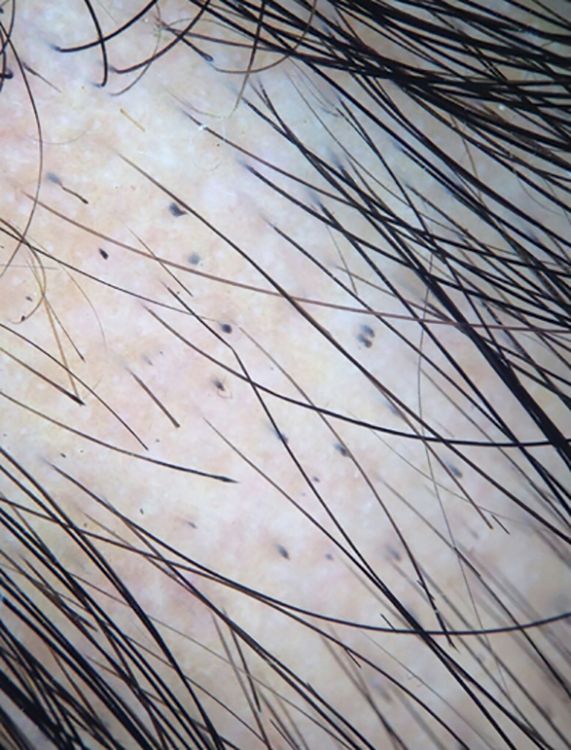 Numerous diffuse yellow dots of different sizes and a large number of regrowing tapered terminal hairs are in the entire scalp.

This is the most common patterned alopecia in both the sexes. Male and female AGA share similar dermoscopic features (Fig. 3). 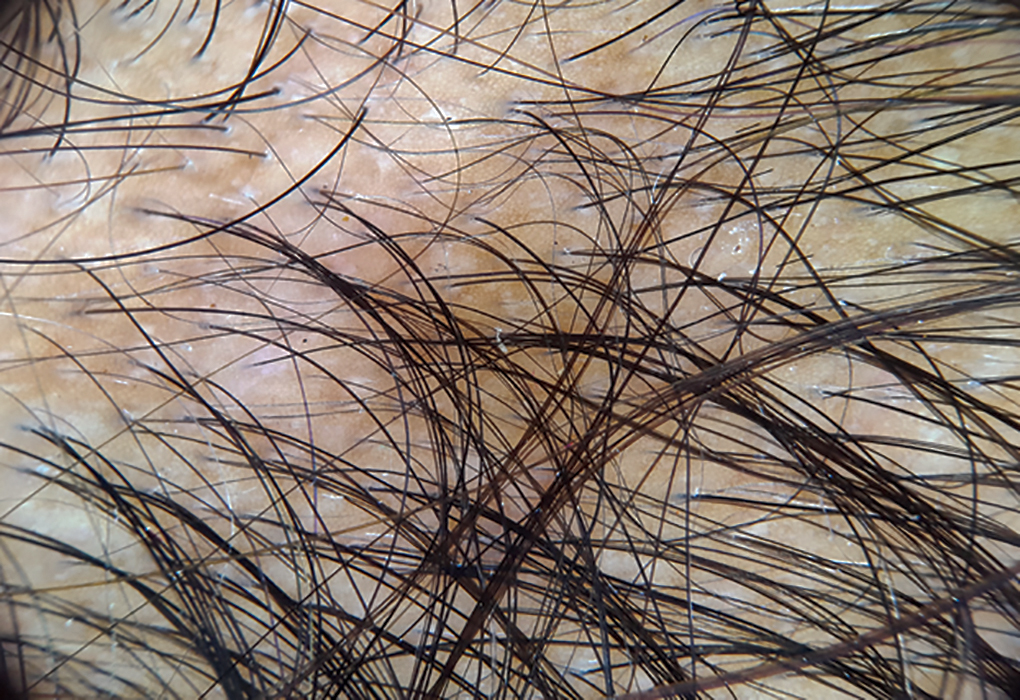 (A) Short hair with vertical split at distal end, magnification × 200; and (B) hair broken at different lengths

Trichotillomania is an impulse control disorder which involves pulling out one's hair. It may occur in any hairy region of the body, however, the most common sites are the scalp, eyebrows, and eyelids. The commonest manifestation is patchy areas of hair loss on scalp mimicking alopecia areata (Figs 4A and B).

Flame hairs are semi-transparent, wavy, and cone-shaped hair residues. The V sign is created when two or more hairs emerge from one follicular opening, which are pulled simultaneously and break at the same length above scalp surface.

Tulip hairs are short hairs with darker, tulip flower-shaped ends developing due to a diagonal fracture of hair shaft.

When hair shafts are almost totally damaged only a sprinkled hair residue is visible. This finding is referred to as “hair powder.”

It is a developmental defect which is present at birth and becomes clinically apparent at 3 to 6 years of age. A triangular patch of hair loss over the fronto temporal area, with its apex toward the vertex characterizes the condition. In case of bilateral presentation, it closely mimics AGA and alopecia areata, if present unilaterally.

Karadağ and Güleç studied nine patients with CTTA and described short vellus hairs, varying lengths of vellus hairs and white hairs in all their patients.14 No exclamation mark hairs were seen here, like in alopecia areata.

It is a type of alopecia where a large number of hairs throughout the scalp enter the telogen phase simultaneously. There are many causes of this type of hair loss including the less common physiologic conditions like in newborns and postpartum period. Stresses, such as severe chronic illness, prolonged psychological stress, endocrinopathies and drugs precede telogen effluvium.

There is no vellus hair or hair shaft thickness variability seen, which distinguishes telogen effluvium from AGA.

The dermoscopic findings do not provide any clue regarding the cause of the same. This is a diagnosis of exclusion. 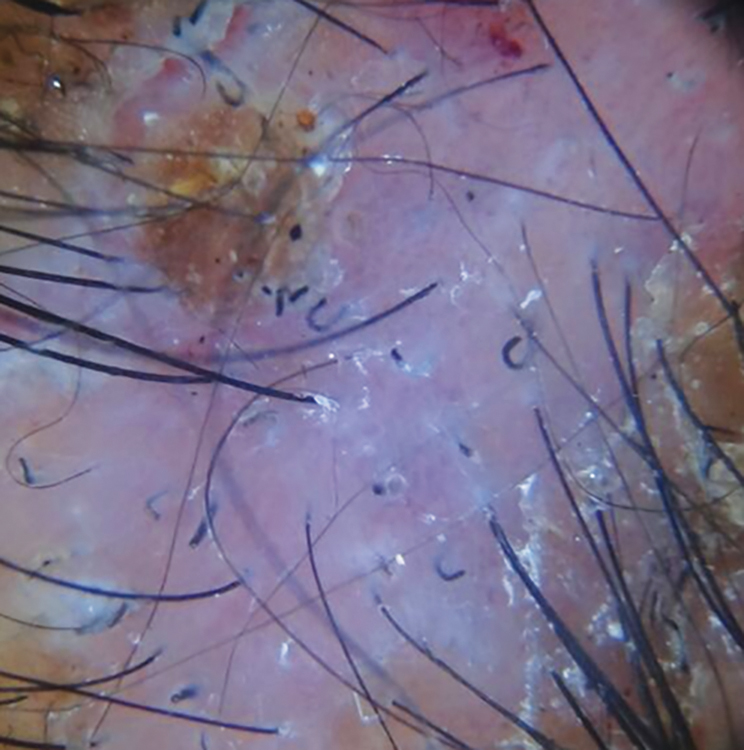 Comma or corkscrew hairs are seen in both endo and ectothrix variants of tinea capitis.

Black dots, monilethrix like hairs, and exclamation hairs are seen.17

Dermoscopy as a Diagnostic Tool

Chiramel et al have described the potential of dermoscopy to make the differential diagnosis of various alopecia with ease in 90.5% of cases where clinical diagnosis was not obvious.11 A study by Elzbleta did find sensitivity and specificity of dermoscopy as a diagnostic method for female pattern alopecia to be 96 and 98% compared to clinical diagnosis. In case of telogen effluvium, the values were 85 and 98%.18 Dermoscopic parameters, such as black dots, vellus hair, diversity in hair diameter, yellow dots, exclamation hair, and thin hair are statistically significant in differentiating a non cicatricial alopecia from cicatricial (Flow Charts 1 and 2).11

Dermoscopy is a useful noninvasive office based procedure to diagnose and monitor the treatment of different types of nonscarring alopecia.