The hair transplantation (HT) and trichoscopic evaluation are two growing fields in dermatology. Dermatoscope is a simple user-friendly tool used extensively by the dermatologist to perform trichoscopy.1 It can be considered as stethoscope for an hair transplantat surgeon, as it assesses the scalp and offers both diagnostic and prognostic insights. There are no studies for dermascopic analysis of transplanted scalp in the literature. We present clinical and dermascopic evaluation of the patients who had undergone HT and also in patients who sought for correction of already performed HT for various reasons.

CLINICAL AND DERMASCOPIC OBSERVATIONS OF DONOR AND RECIPIENT ZONES

We examined the scalps of hair transplanted patients from immediate postoperative period. We also examined the patients who presented to us for the first time for hairline corrections (to add more density, laser hair removal of very low-placed hairline and for esthetic complications, such as pits and cobbling). Trichoscan was performed with handheld dermascope of 10× magnification. The trichoscopic digital imaging (fotofinder 10-160X) system with epiluminescence microscopy with video documentation was also used for the evaluation.2,3 Clinical and dermascopic evaluations were done in both donor and recipient zones. The scalp examination in donor zone included mainly the scar assessment and evaluation of posttransplant density. Recipient site was assessed for the density of transplanted hair, angle of exiting hair, angle of the hair in the hairline, and overall esthetic appearance.

The donor zone scars can be secondary to the follicular unit extraction (FUE) or follicular unit transplantation (FUT). Dermascopic examination of donor zone can be done as early as day 3, it appears as tiny pinkish flares on dermascopy (Fig. 1). It shows decreased density of the harvested area post FUE. Sometimes, we also see sterile folliculitis at the site of emerging hair (Fig. 2). After complete healing, FUE scars appear as white flares (Fig. 3). The size of flares depends on the size of punches used for harvesting the grafts. It is ideal to use 0.8 to 0.9 mm punches, only to avoid large scars.4 Too close harvest can appear as linear scars. Clinically, they have moth-eaten appearance and on trichoscopic examination, these areas appear as linear white flares (Fig. 4).

Clinically, FUT scar can be flat and atrophic or broad and hypertrophic depending on the patient's inherent characteristics of the scalp and also the breadth of the strip harvest. For esthetically better scar, trichophytic closure is always preferred.4 Figures 5A to C, show wound closure of FUT with and without the trichophytic closure.

The recipient site is assessed for density, flow of hairs (angle of hairs), and Scars. Trichoscopy of recipient site on day 3 assesses the early uptake of graft, extent of crusting, and extent of empty slits. The transilluminating light source and magnifying optics of dermascope with both polarized and nonpolarized light give complimentary information of transplanted grafts positioning by nonpolarized light at epidermal level; whereas blood vessels and cicumferential epithelial proliferation looking as red color and white streaks respectively indicate early development and survival of the grafts at dermal level with polarized light. The crust is clinically well evident, Fig. 6A shows the dermascopic appearance of crust on day 3. At the end of 1st week, on dermascopy, we can make out adherent or less adherent crust. The adherent crust indicates improper cleaning of scalp. Figure 6B shows complete crust dislodgement at day 10. Early dermascopic examination also helps to identify the empty slits, where implants are missed, which is clinically not evident (Fig. 6C). Figures 7A and B show immediate posttransplantation areas at 6 weeks and 3 months. Hairline creation is the signature of each surgeon, it speaks the quality of HT. Clinically, hairline looks soft with singular hairs and good density. There are no mutifollicular units in the hairline.4 Figures 8A and B show- esthetically pleasing hairline without bulky grafts and curling of hairs. Figures 9A and B shows space hair with varied angle and direction. The hair emerging angle is not acute. Figures 10A and B show the transplanted hairs in between the existing vellus hair. There is a perfect matching of the angle of emergence of transplanted hairs with the existing hairs. Esthetic complications, such as pits and cobblestoning are evident in technically poorly performed HT. Cobbling appears as papules around hair follicles and pitting appears as depressed ice-pick like scars around the hair follicle (Figs 11A and B) and (Figs12A and B). 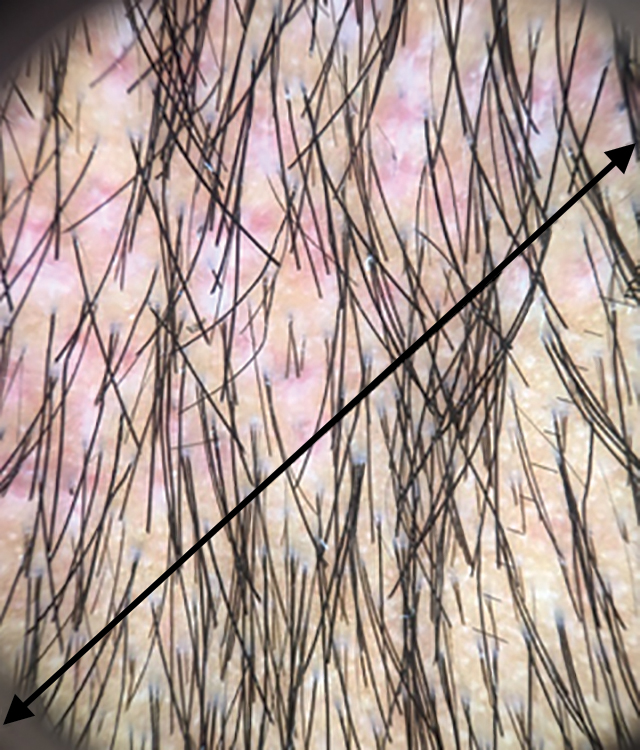 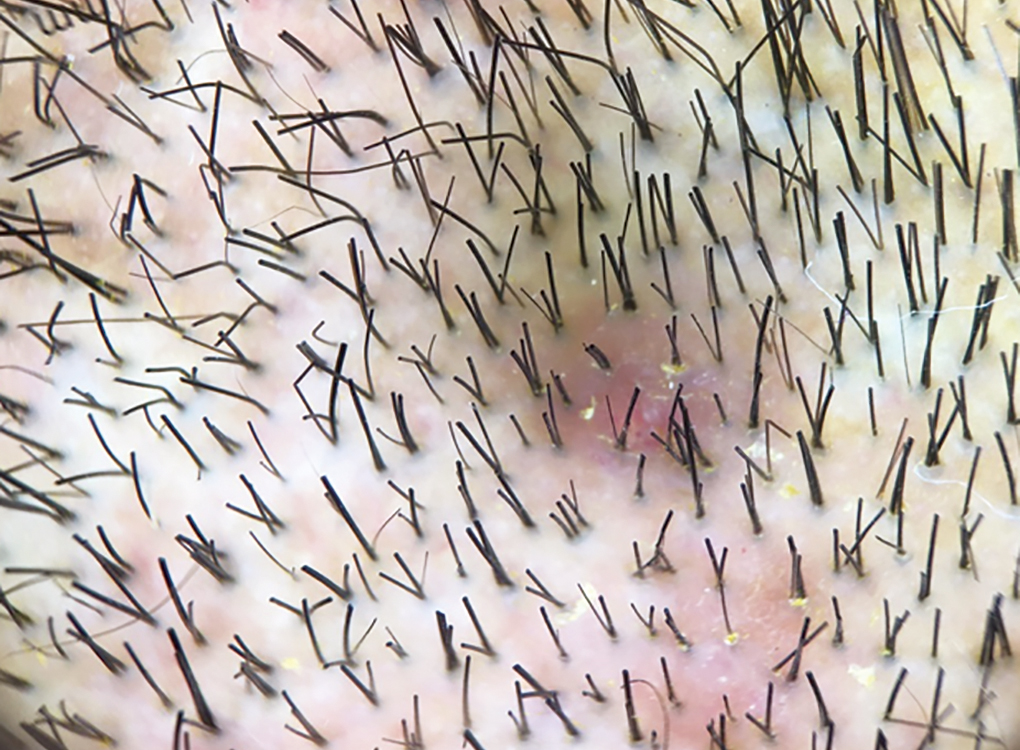 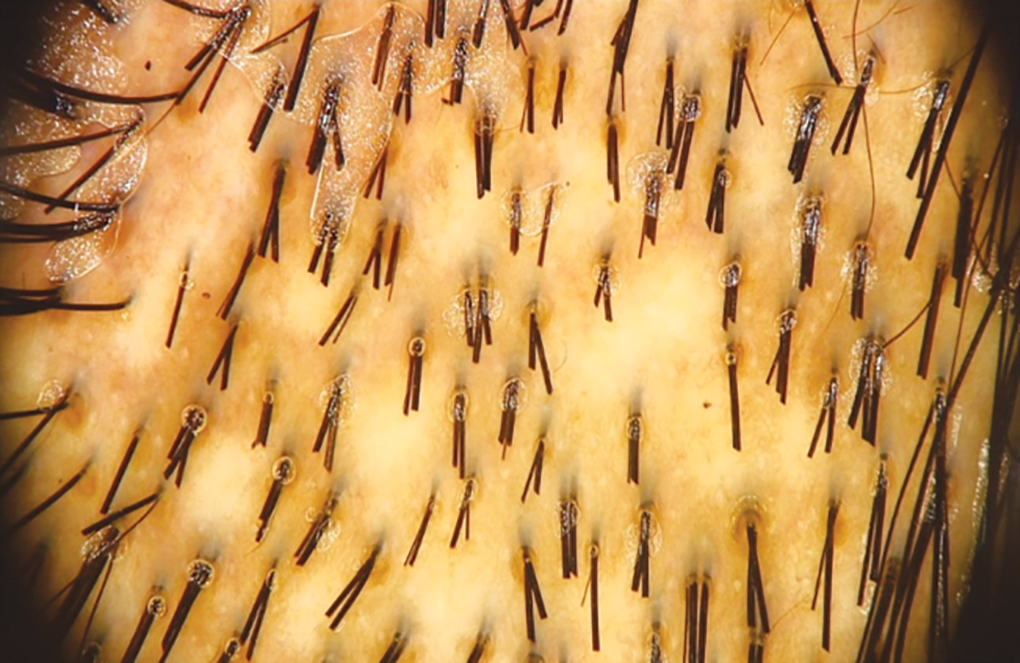 Linear white flares due to close harvesting of FUE grafts 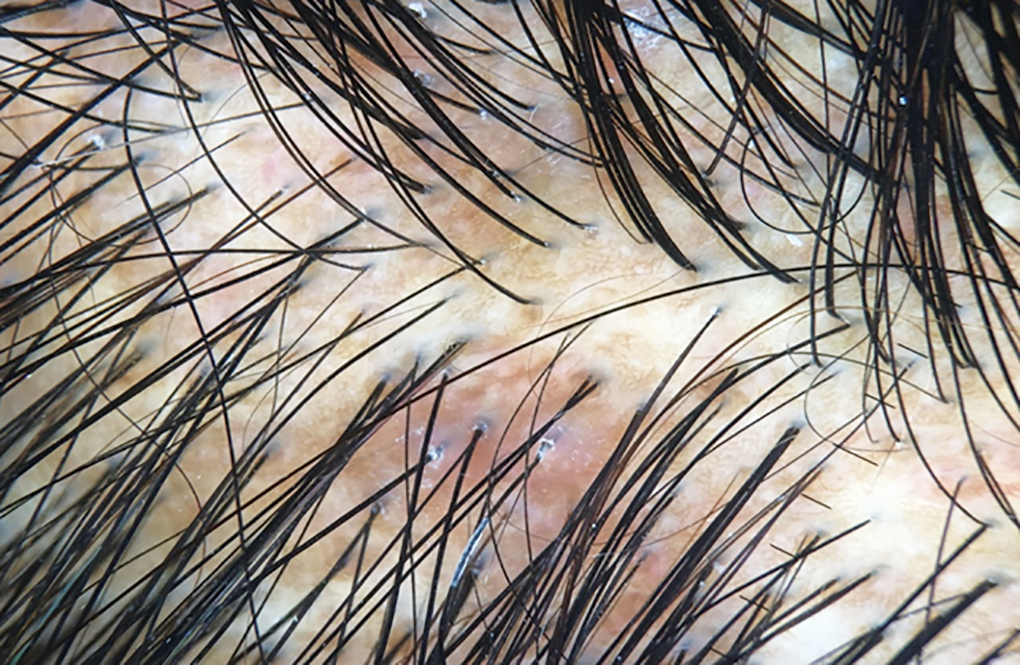 Sequel of healing in recipient zone: (A) At day 3 with crust; (B) day 10 after crust dislodgement; and (C) empty slits indicating missed transplantation areas at day 3

Sequel of healing in recipient zone: (A) Empty areas shows initial hair loss at 6 weeks; and (B) at 3rd month shows regrowth of hairs

(A) Posttransplant cobble stoning; and (B) tenting with dermascopic image

Cobble stone deformity is due to superficial graft placement due to shorter slits. Pitting is due to the placing of grafts in longer slits (longer than the grafts). Figures 13A to C show correlation of normal implanted zone with esthetic complications. On tricoscopy, uncomplicated zone shows grey hue around the follicles. Cobbled zone shows accentuation of this phenomenon. Pitting is evident in polarized light as valley like margins sloping toward the follicle.

Clinical and dermascopic images of pits on polarized light

(A) Uncomplicated natural hairline. Perfollicular grey hue is present; (B) hairline with cobbling deformity and also wrong angle and multifollicular units in hairline. Cobbling presents as accentuation of grey zone; and (C) pitting

The trichoscope has a lot of applications in HT, it aids accurate diagnosis, assess the donor area and evaluates the results after surgery.

Second, the trichoscope assesses the donor zone. The safe donor zone is the horseshoe-shaped area of 5 to 7 cm width overlying the mid-occipital region.4 However, the boundaries of safe zone should be individual to each patient. The trichoscopic evaluation is very valuable here. It helps in assessing the density, grouping so that number of sessions and graphs for a patient can be planned and documented. A donor supply to recipient demand ratio is estimated that helps the physician determine the good/poor candidate for surgery. The digital imaging also assesses terminal vs miniaturized (vellus) hair or the amount of anagen vs telogen hair in an area that can be quantified and compared.10 The donor density can be quickly and accurately measured in multiple areas providing an estimate of donor supply. The device assesses the parafollicular area for any disease pathology (seborrhea, dermatitis, psoriasis and healed folliculitis scar). The device not only assesses the density but also the emergence of hair and intracutaneous direction of follicle can be assessed.

Third, the trichoscopy documents the hair growth and loss. If early dermascopic examination of scalp shows many empty slits, it infers inefficient filling of the areas. This can be utilized to educate the assistants to correct themselves for better results.

The trichoscopic image of pretransplant area can be compared with image of posttransplant area of single point. This is more important in handling dissatisfied patients. It easily differentiates the thicker transplanted hair growing in the midst of thinner vellus hair (Figs 10A and B). The device also assesses the other features of hair -transplantation, such as angle of hair and esthetic complications (pits and cobbling) (Figs 13A to C).

Fourth, the trichoscan of donor area after HT, especially the FUT scar which is closed by trichophytic method shows regrowth of hair within the scar (Figs 5A to C). These pictures can motivate the patients undergoing HT to accept the FUT technique who have scar phobia.

Therefore, trichoscopic examination helps dermatologist to look into these tiny intricacies and correlate these with clinical examination. This helps them understand the technical mistakes and correct the defects for perfection.

The steps in HT involve assessment, harvest, and transfer of thousands of individual follicular units to the recipient site. This mandates the usage of technology at all points. Hair transplant surgeons run a busy clinic and this user-friendly tool can aid in patient assessment more scientifically. Dermascope, as a diagnostic tool, monitors treatment response and also gives an insight on prognosis. This article would encourage all the readers to take up larger studies to evaluate the transplanted scalp for more growth in this field.