Atrichia with papular lesions (APL) is a rare genodermatoses with unclear etiopathogenesis. The APL is a rare, autosomal recessive form of total alopecia of the scalp, eyebrows, eyelashes, axillary and pubic hair, characterized by hair loss soon after birth and the development of keratin-filled cysts over extensive areas of the body.1,2 It is often confused with alopecia areata and other forms of patchy or total alopecias due to the subtle clinical features and indistinguishable characteristics to the untrained eyes. Clinical suspicion with histopathologic demonstration of keratinous cysts from the papular lesions remains the mainstay of diagnosis. To the best of our knowledge, dermoscopic features of congenital APL have not been studied so far. Here, we present two cases of APL diagnosed based on clinical examination with distinct dermoscopic features.

The first case is that of a 10-year-old male child, born to nonconsanguineous marriage with a history of sparse hair since birth, with no significant family history of similar involvement. Clinical examination revealed sparse discrete, lustreless hair with rough texture scattered over the scalp. The eyebrows and side locks were also involved with generalized hypotrichosis over the body. A closer cutaneous examination revealed tiny monomorphic keratinous papules over the scalp, upper back, and lateral arms. Rest of the cutaneous and systemic examination was within normal limits. Dermoscopy of the scalp revealed clusters of white dots at regular intervals across the entire scalp (Figs 1A and B). 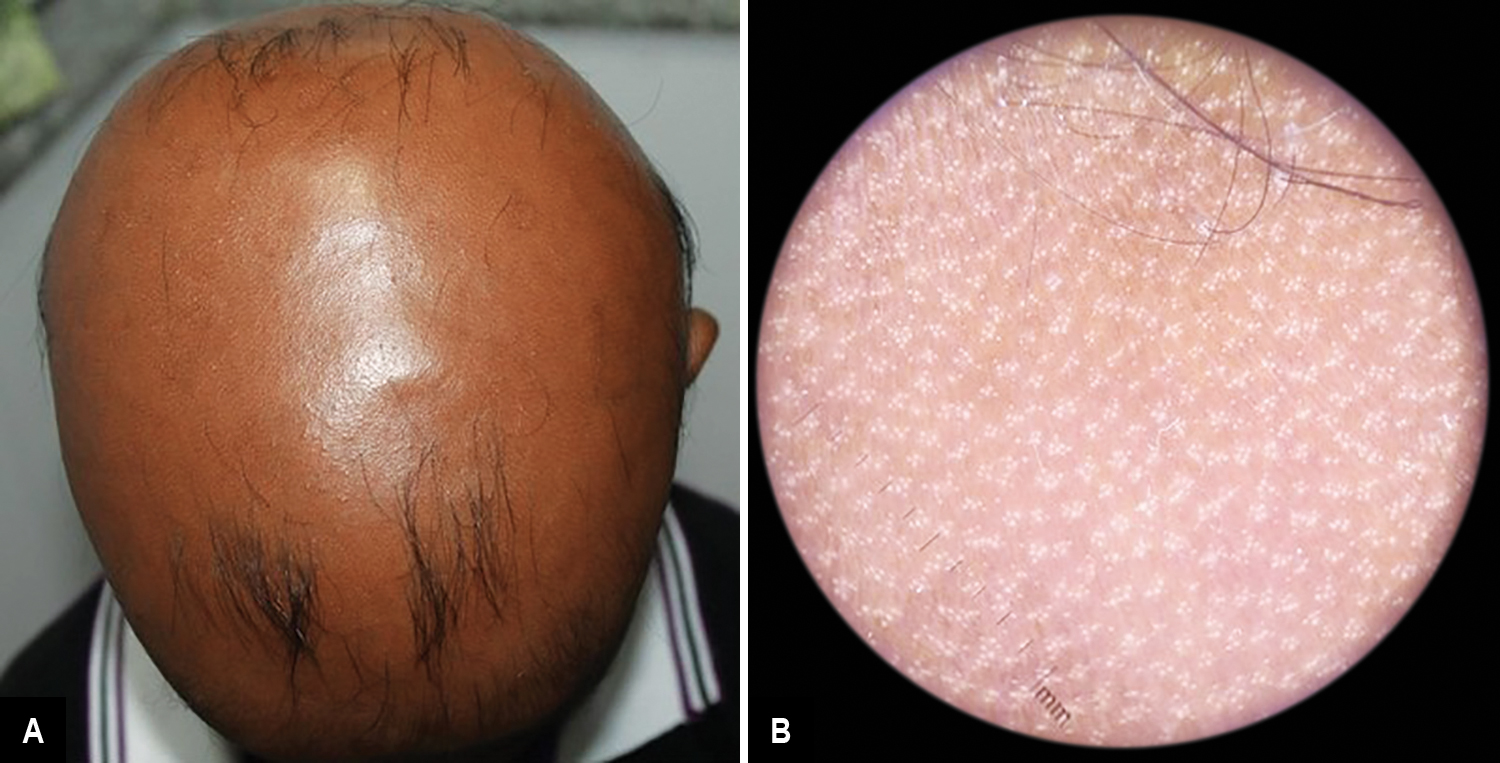 The second case is that of a one-and-a-half-year-old female child born to 3rd degree consanguineous marriage presenting with existence of hair over the centrofrontal scalp area and discrete sparse hair scattered over the rest of the scalp. Tiny skin colored keratotic papules were noted over the scalp in a random distribution. Family history and systemic examination was not significant. Dermoscopy revealed a similar pattern of a cluster of white dots distributed in a regular distribution over the entire scalp area (Figs 2A to C).

Dermoscopy forms a noninvasive diagnostic tool of high implications, especially in pediatric age group where it obviated the need of scalp biopsy. Although trichoscopy is gaining rapid acceptance among practitioners, to the best of our knowledge dermoscopic features of congenital APL have not been described. The pathogenesis may be explained as the hair matrix cells in APL undergo a premature and massive apoptosis, together with a concomitant decline in Bcl-2 expression, a loss of neural cell adhesion molecule positivity, and a disconnection from the overlying epithelial sheath essential for the movement of the dermal papilla3. As a consequence, the hair bulbs and dermal papillae remain stranded in the dermis, and communicating messages between the dermal papillae and stem cells in the bulge are not transmitted, leading to no further hair growth. The noted dermoscopic feature is a characteristic pattern of cluster of white dots on the scalp which we describe as a “cluster of stars” appearance.

(A, B) Scalp representing sparse hair with tiny skin colored papules; and (C) cluster of star appearance on dermatoscopy

We propose that this appearance may be the result of the stranded hair bulbs and dermal papilla in the dermis which probably undergo fibrosis in due course of time and appear as white dots. White dots represent the destroyed follicles that are replaced by fibrous tracts and are better visualized in dark-skinned individuals or over the tanned areas in light-skinned individuals.4 The peculiarity of the pattern lies in the clustering of the dots giving rise to this unique design. The reason for the pattern remains an enigma which will require further studies including dermoscopic and histopathologic correlation on the same.

Dermoscopic finding of cluster of stars appearance can be considered as one of the diagnostic features of APL, thus obviating the need for biopsy for confirmation and alleviating the woes of the child and parents. Further studies on the same will determine whether the “cluster of stars” appearance is confirmatory for APL in times to come.