Mycosis fungoides (MF) is the most common primary cutaneous T-cell lymphoma (CTCL), a proliferation of memory CD4+ T-cells. The MF in early stages, especially patch stage, poses a diagnostic challenge, as it mimics other inflammatory skin diseases like eczema, psoriasis or pityriasis lichenoides chronica.1 Histopathologic diagnosis of MF has false positivity and false negativity rates of about 40%.2 Poikilodermatous MF is a rare distinct clinical variant of CTCL, formerly referred to as poikiloderma vasculare atrophicans or parapsoriasis variegata.3 Herein we report dermoscopic findings in one such case.

A 31-year-old young unmarried male presented to us with complaint of generalized hyperpigmentation with sparing of scalp, face, and hands associated with mild itching since 4 years. The patient was diagnosed as a patch stage MF in 2013 and was given Psoralen + Ultraviolet a therapy from January 2014 to January 2015 for 1 year after which the patient was lost to follow-up and since then he has been off any kind of oral or topical treatment. This was followed by appearance of new lesions, along with increase in pigmentation and size of preexisting patches that spread over to neck, trunk, back, buttocks, bilateral arms, and legs (Figs 1 and 2).

Skin examination showed generalized well-demarcated hyperpigmented poikilodermatous patches with sparing of skin over scalp, hands, and face. The hyperpigmentation over trunk and back was reticulate with focal atrophy (Fig. 3). The poikiloderma was more pronounced over the arms and legs. 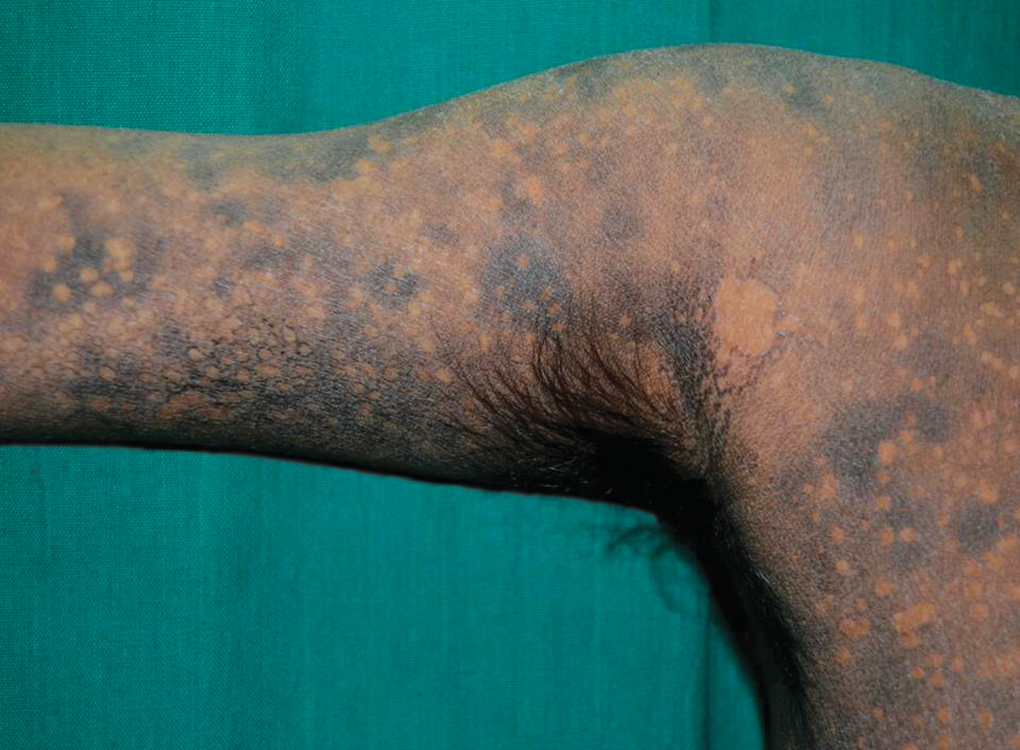 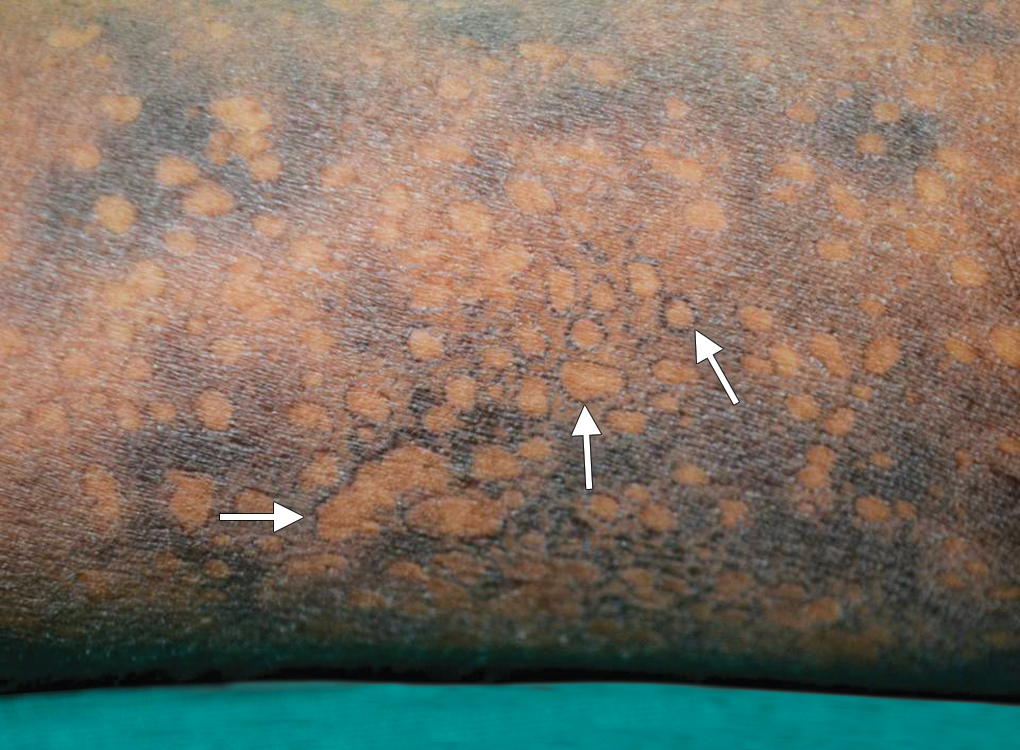 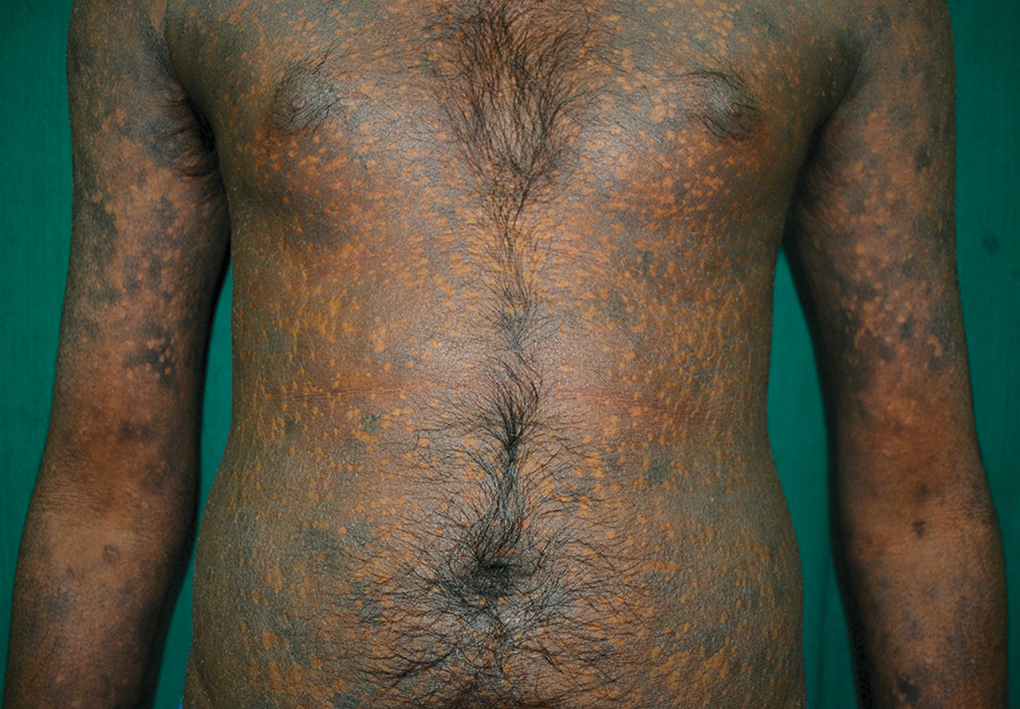 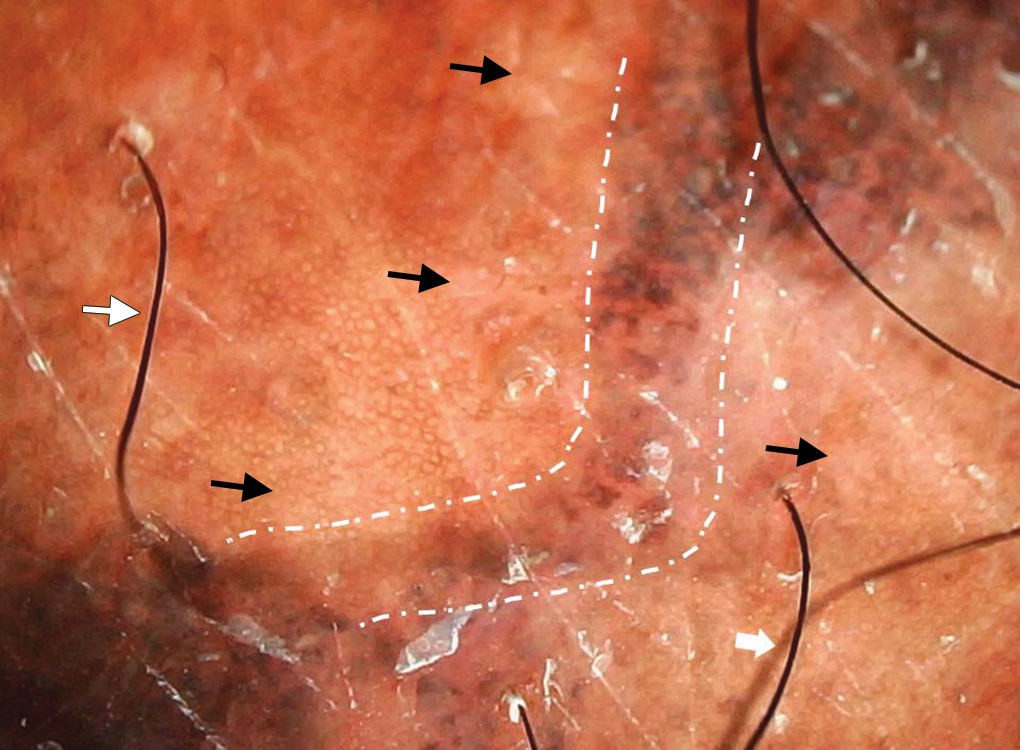 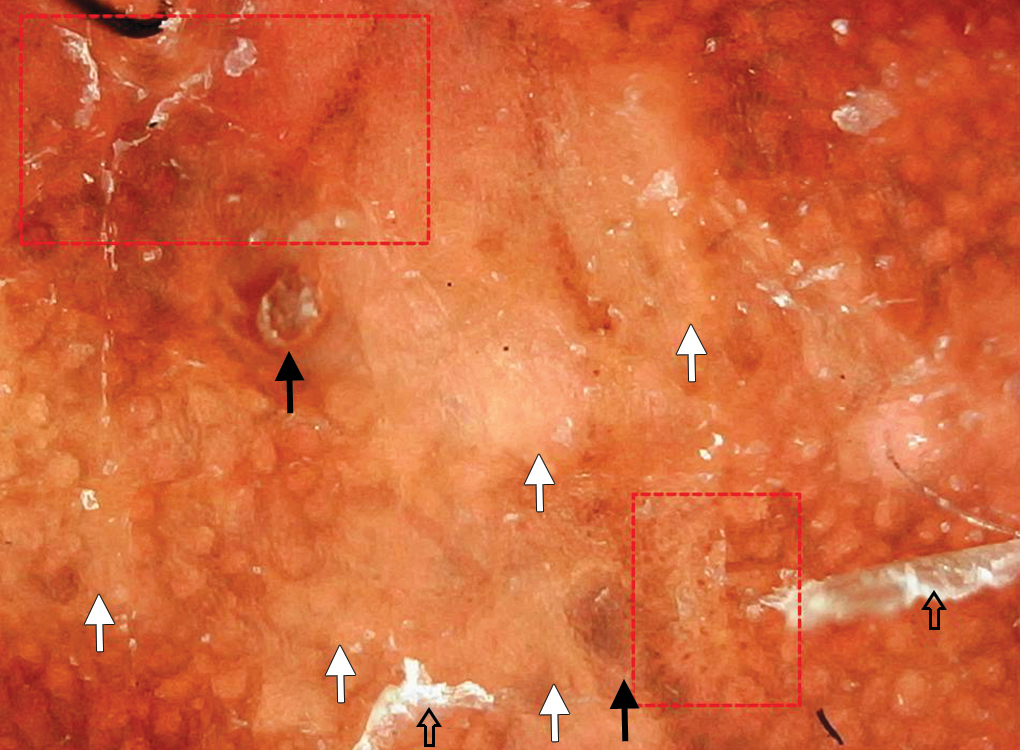 Dermoscopy of the annular lesions over arms (40×) displayed a beaded necklace-like appearance (resembling to an extent a lesion of superficial porokeratosis) with inner hypopigmented blotches and atrophy with patchy accentuation of pigment network and outer areas that displayed irregular hyperpigmentation with keratin plugs (Fig. 6). The margin of which at (200×) displayed a curvilinear streak with pigment globules (arrows), patchy pigment loss, and atrophy in the center with red dots near margin (Fig. 7).

Skin biopsy specimen showed mild epidermal hyperplasia with lymphocytic lichenoid interface dermatitis and epidermotropism of atypical lymphocytes with relative lack of spongiosis (Fig. 8). There was vacuolar alteration of the basal layer without evident spongiosis and scattered melanophages in the papillary dermis. There was tagging of atypical large lymphocytes along the basement membrane with a few larger lymphocytes located even above the stratum malphigii rest of the epidermis was peppered with lymphocytes. There was a clear halo around the lymphocytes with some atypical lymphocytes coalescing to form Pautrier's Pautrier's micro- abscesses (Fig. 9). The size of lymphocytes in epidermis was larger and cerebriform as compared to those in dermis. In view of these findings, a diagnosis of poikilodermatous MF patch stage was made. 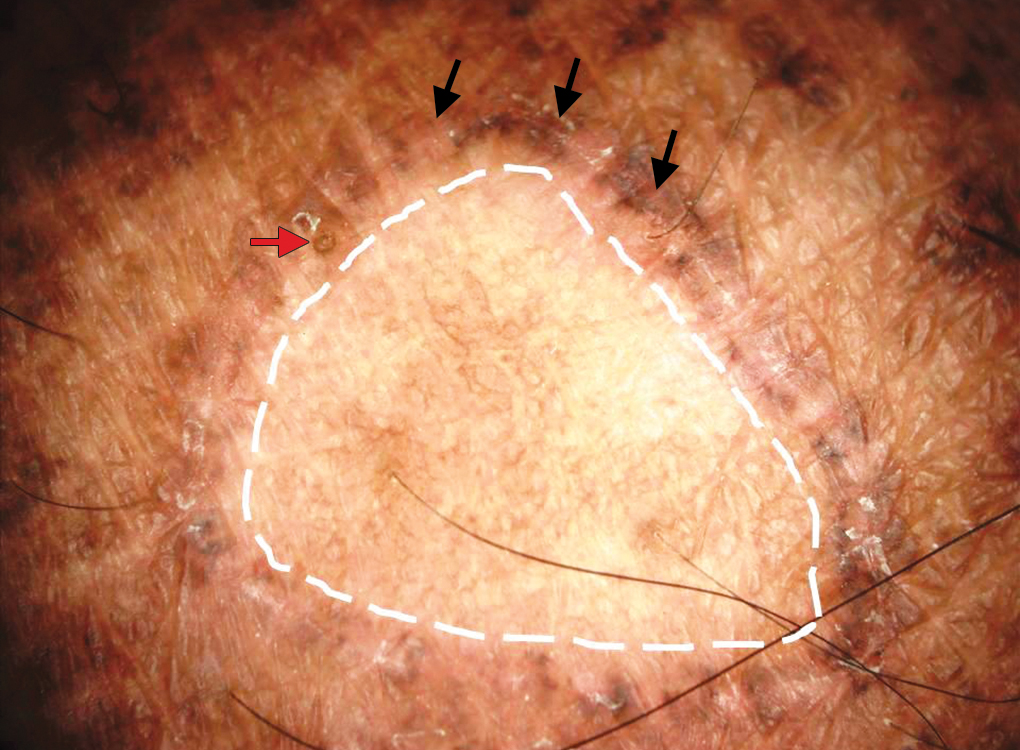 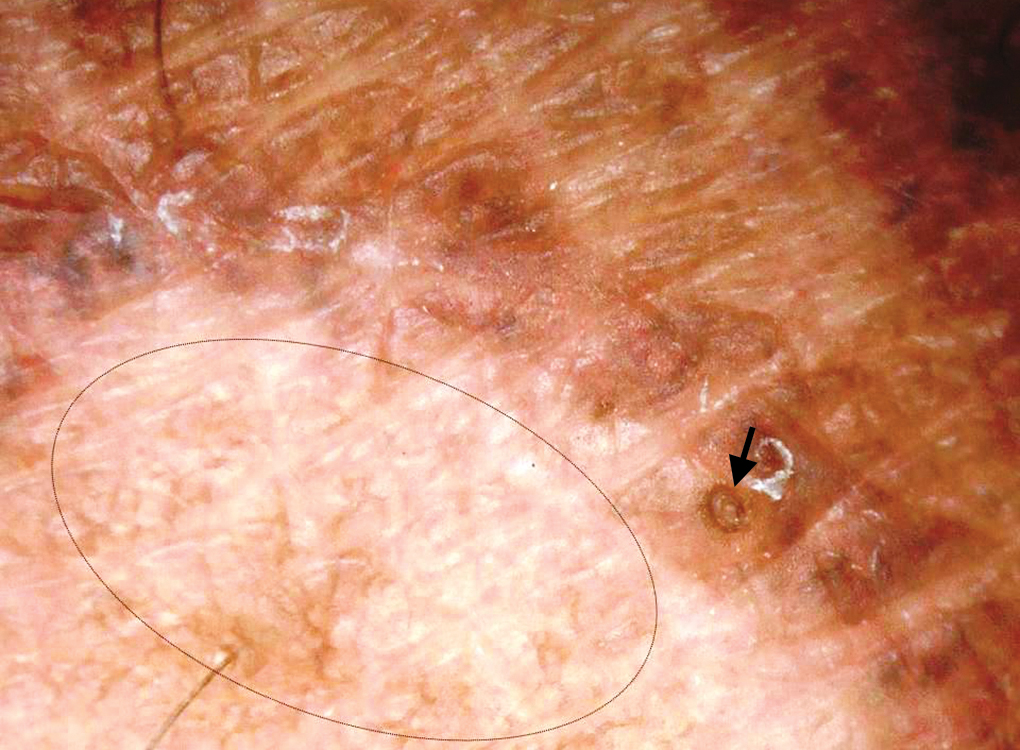 Histopathology (H&E 200×) of annular lesion in Fig. 2 showed lichenoid interface dermatitis and epidermotropism of atypical lymphocytes, tagging of atypical large lymphocytes along the basement membrane with several larger lymphocytes located even above the stratum malphigii 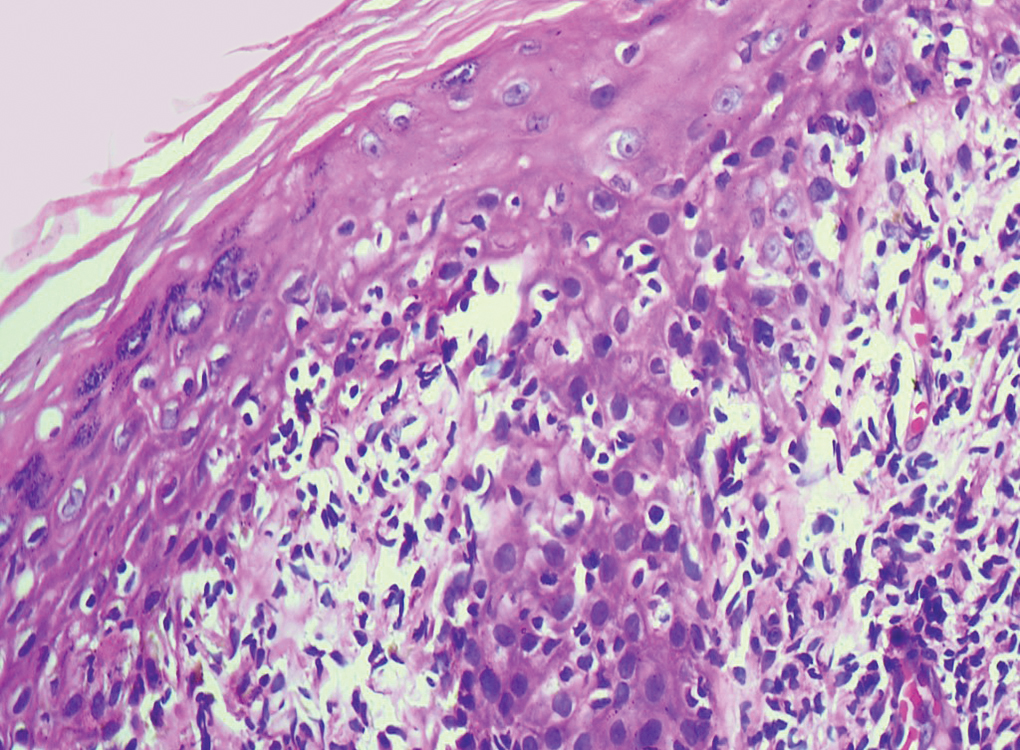 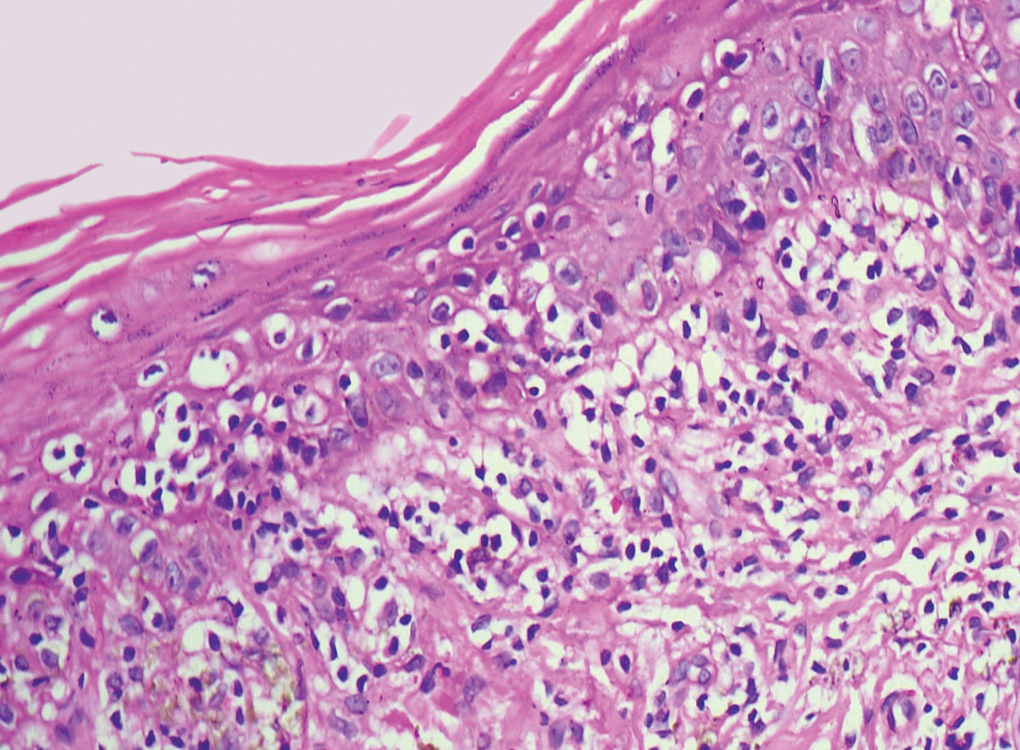 Dermoscopy of hypopigmented MF has been described by Lallas et al, wherein an analysis of 67 dermoscopic images was carried out retrospectively. They described presence of dotted vessels, fine short linear vessels, spermatozoa-like structures, orange-yellowish patchy areas, white scales, and yellow scales.1 Similarly, in an Egyptian study of dermoscopy of dermatoses, clinically similar to MF were compared with plaque type psoriasis (PP), chronic dermatitis and lichen planus (LP) by Marwah et al. Besides the above findings, they noted that dark globules and light brown multifocal pigmentation on a pink homogeneous background are highly suggestive of MF and that dermoscopy can be an essential tool to differentiate MF from other PP, chronic dermatitis, and LP.4

Dermoscopy of pokilodermatous MF has not been documented in Indian skin and the only reference available is in a Chinese patient as described by Xu et al. They described multiple polygonal structures containing hypopigmented lobules with white storiform streaks, studded with fine red dots as seen in our patient. In addition, their patient also showed hairpin vessels on the margins.5 The septa between these lobules of pigmented dots showed unevenly and intermittently distributed black dots along with red and yellowish smudges that indicate telagiectasia. Hypochromia in MF was previously associated with well-defined clinical forms, such as poikilodermatous MF or resulting from phototherapy treatment as described by Choe et al.6