Study of nail diseases until recently was largely restricted to more on clinical examination and microbiological evaluation and less on histopathological examination. The unique anatomy of nail and lack of expertise among clinicians often pose a problem in accurate diagnosis and thus management of nail diseases. Surgical intervention on nail unit including diagnostic biopsy is often perceived as a painful procedure. In addition, reluctance of most clinicians to perform biopsies for diagnosis and lack of expertise among pathologists in interpreting the nail histopathology further compound the problem.1

The application of dermatoscopy/dermoscopy for the examination of nail has opened an exciting front.2 Dermoscopy of nail unit is referred to as onychoscopy. It is a noninvasive and rapid office-based technique applied for the better understanding of nail pathology.2 Short learning curve, cost-effectiveness, and reproducibility are other distinct advantages of onychoscopy. It supports retaining photographic documentation and thus is useful for future reference and follow-up. It acts as a link between naked eye examination and histopathology. Onychoscopy was initially employed to study the pigmentary abnormalities of nail unit and proximal nail fold capillaries (NFC). However, at present, onychoscopy has fast expanding indications and is an upcoming tool employed in the diagnosis of infective, inflammatory, and neoplastic nail diseases.3-6 This article is an attempt to sensitize dermatologists with applications of onychoscopy for improving the diagnosis of various nail diseases and evaluation of treatment outcome.

As in dermoscopy of the skin, contact or noncontact dermatoscopes can be used for onychoscopy. Both polarized and nonpolarized light sources are essential. At present, there is no consensus on the superiority of one device and light source over another.7 Whereas a nonpolarized light source is used for the study of surface anatomy and associated changes (Fig. 1A), polarized light is better suited to study the pigmentation and vascularity (Fig. 1B). It is prudent to start with a lower magnification (~10×) for a global view of the pathology and then move to the higher magnification (~50—200×) for finer details.

Application of interface medium improves the visualization of color changes and vascularity, especially in the study of proximal nail fold (PNF) capillaries. Various interface medium may be used in onychoscopy, viz. immersion oil, ultrasound gel, and antiseptic alcoholic solutions.8,9 However, for examination of the nail apparatus, ultrasound gel is considered to be superior to alcohol because the gel's viscosity prevents it from rolling off the convex nail surface. In our opinion, the choice of interface medium solely depends on individual experience and comfort. 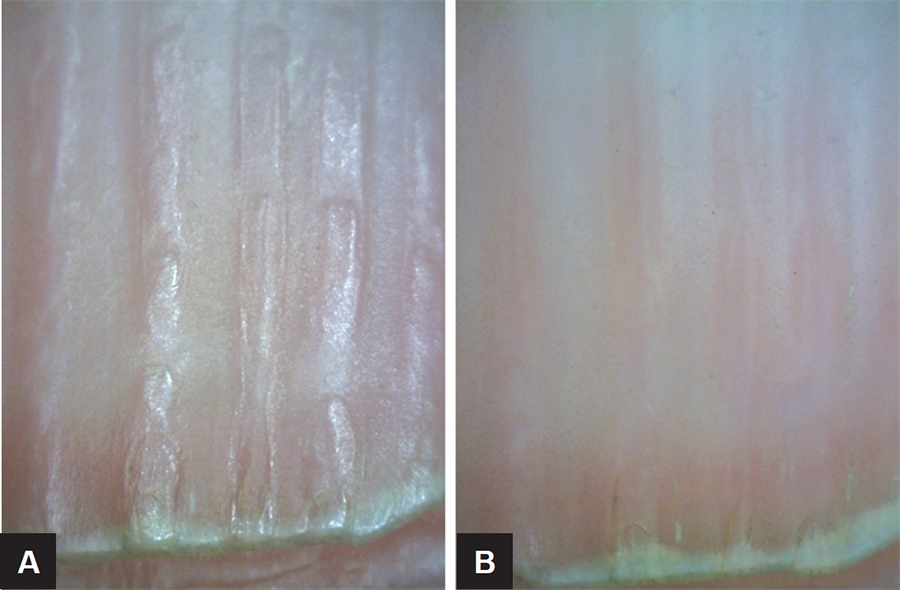 Before recognizing the various pathological signs in the nail unit, it is important to understand onychoscopic features of healthy nail. The PNF shows regularly and evenly spaced hairpin loop vessels, the cuticle perfectly adheres to the nail plate, and the nail plate appears as shiny and translucent structure (Fig. 2A). The underlying pink color represents the nail bed and longitudinal capillaries can be visible in the distal nail bed just proximal to the subcorneal band. Nail matrix can only be visible as lunula. The lateral nail fold and the hyponychium show the normal ridge pattern (Figs 2B and C).

The initial application of onychoscopy was to study the pigmentary abnormalities of nail unit and NFCs in the PNF. In the last one decade, its use has expanded remarkably to include tumors, inflammatory and infective conditions of the nail unit.

The most extensively studied nail condition by onychoscopy is melanonychia. The role of onychoscopy in differentiating a benign longitudinal pigmentary band from a malignant one is well established.10-14 In 2013, the International study group on melanonychia published its guidelines for the use of dermoscopy in detection and management of nail pigmentation.7

Onychoscopy has markedly improved the visualization of features in nail psoriasis.17,18 Onychoscopic features observed depend upon the part of the nail unit affected. 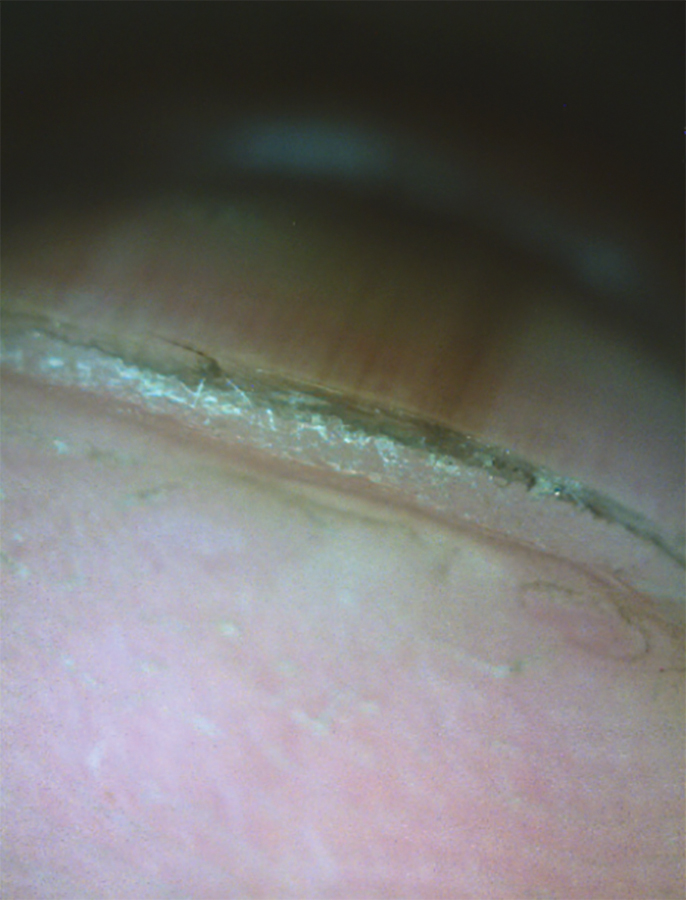 Psoriatic coarse and irregular pits, some covered with scales (10×) 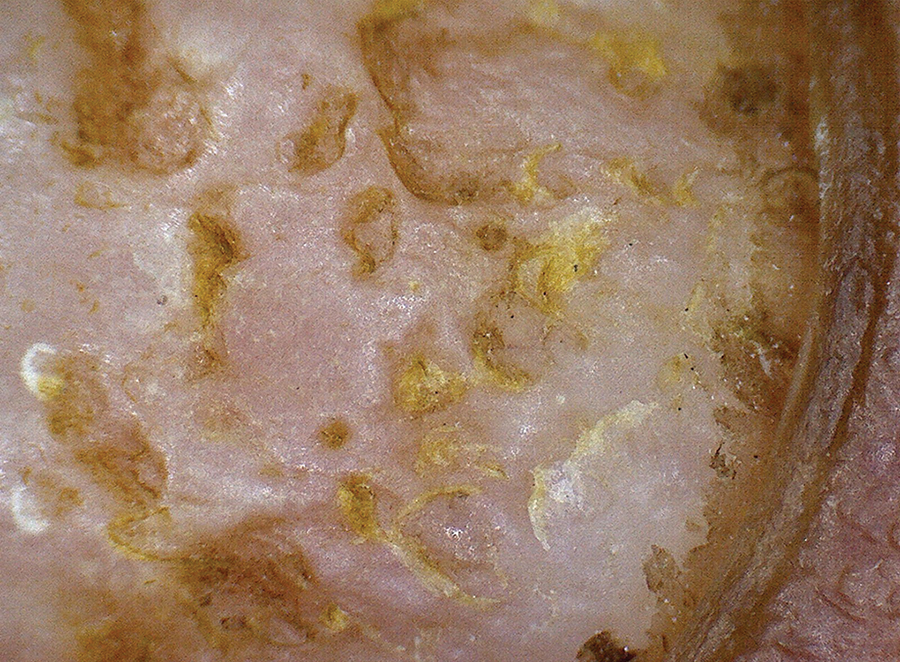 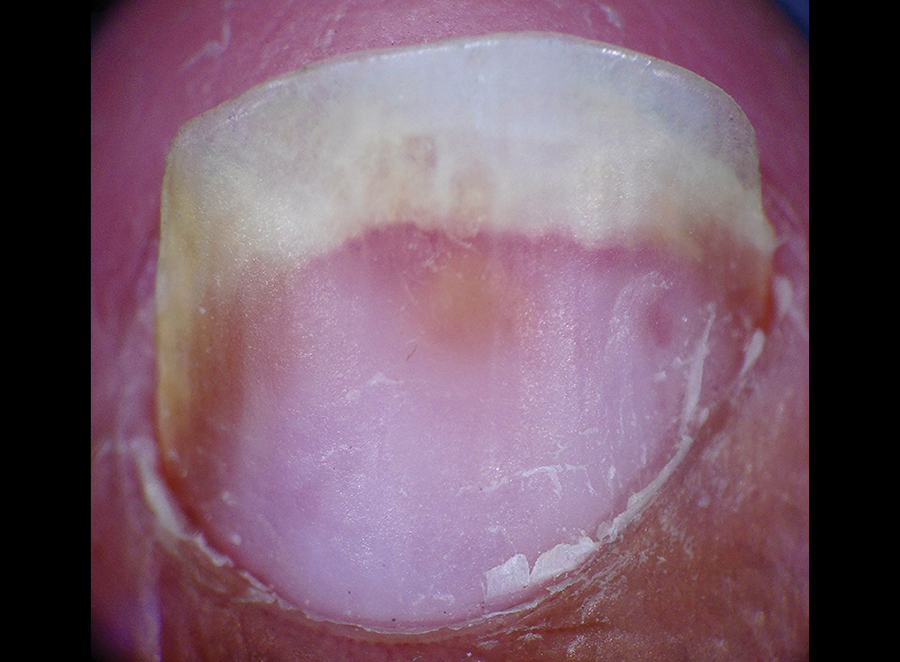 Proximal nail fold: Mean capillary is reduced and capillary architecture alterations in the form of dropouts and coiled capillaries are seen.20-23 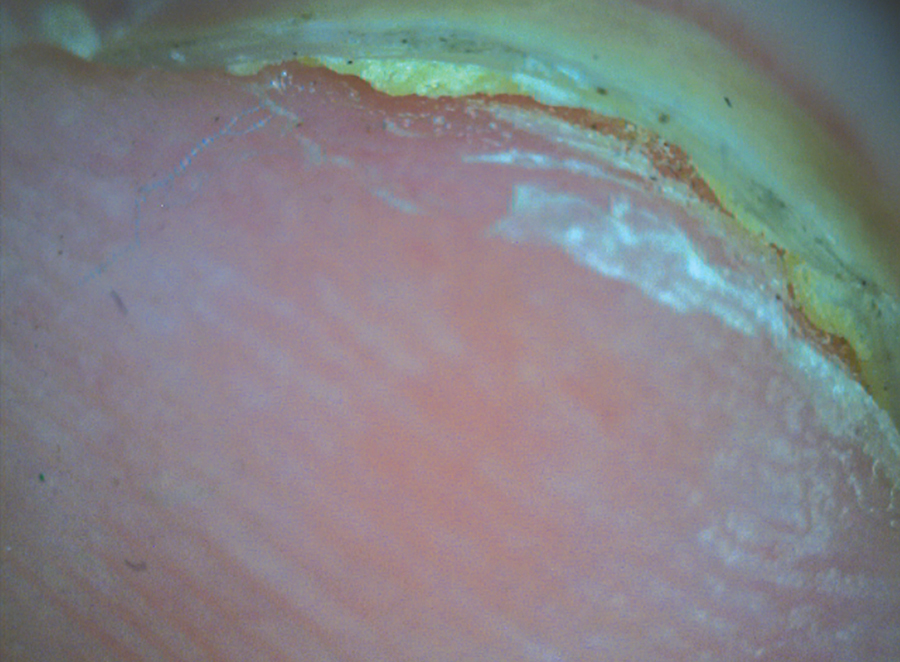 Hyponychium: Dilated and tortuous capillaries may be seen that correlate with the disease severity.24

Among the onychoscopic features, nail pitting, splinter hemorrhages and onycholysis are the most common findings.17,18

Around 10% of cases of lichen planus have nail involvement.25 As in nail psoriasis, the onychoscopic features observed depend on the part of nail unit affected: 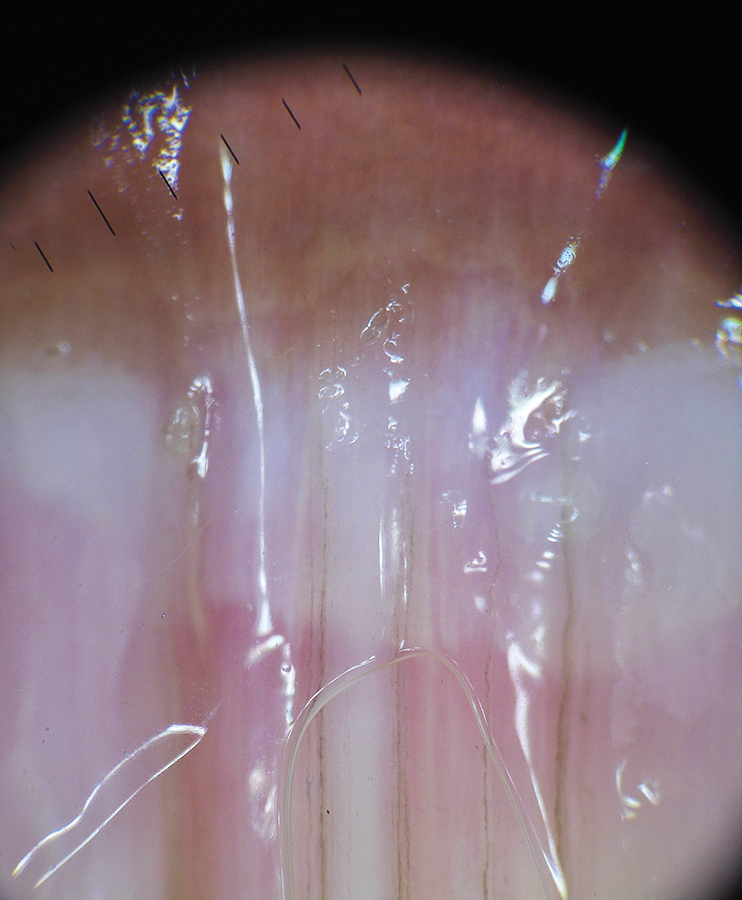 Onychomycosis: The presence of jagged edges with spikes at the proximal edge of onycholytic band corresponds to the fungal invasion of the nail plate (Fig. 11).26-28 Onychoscopy is useful in differentiating the pattern of onycholysis seen in OM from nail psoriasis and traumatic onycholysis (Fig. 12).4 In contrast to the jagged proximal onycholytic edge in OM (14), it is linear in psoriasis (Fig. 12B), and in traumatic onycholysis linear proximal edge is often associated with subungual hematoma (Fig. 12C). This feature of jagged edge is most commonly but not exclusively seen in OM.“Aurora borealis pattern” corresponds to the presence of same or different colors in the onycholytic nail plate (Fig. 13).26 Another pattern known as “Ruins aspect” corresponds to the indented areas on the subungual keratosis and distal pulverization (Fig. 14).28

Fungal melanonychia is seen as a black to brown longitudinal or transverse band. The typical feature is the presence of pigment clumps and/or granules within the bands. This corresponds to the fungal colonies.29 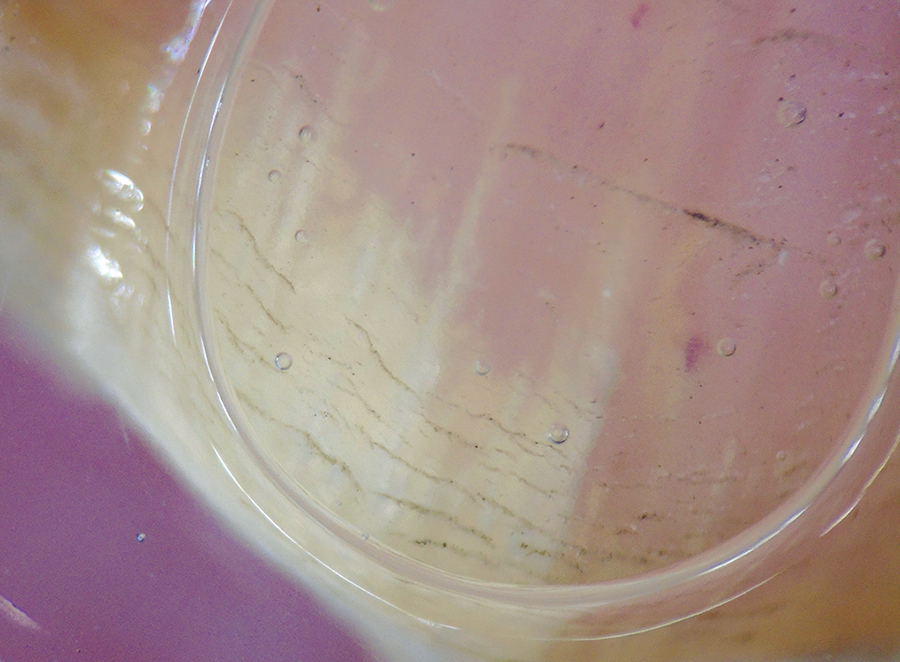 Periungual warts: Onychoscopy shows presence of thrombosed vessels visible as red to black dots within a hyperkeratotic lesion (Fig. 15).15 Onychoscopy in addition helps identify the extent of wart beneath the nail plate (Fig. 15).

Subungual glomus tumor: Typical onychoscopic features have been described for this benign vascular hamartoma arising from the smooth muscle cells of glomus body.30-34 Onychoscopy of the nail plate reveals presence of irregular bluish patch with discrete linear vascular structures (Fig. 16).32 Intraoperative onychoscopy after removal of nail plate has shown presence of ramified capillaries over a blue background.30 This is typically useful for determining the tumor margins as these ramified capillaries disappear abruptly at the margins.30,31 “Pink glow” indicating the vascular nature of the tumor has been described with the use of ultraviolet light dermoscopy.34

Onychoscopy of this benign tumor of nail bed and distal matrix shows red bands originating from the lunula with or without splinter hemorrhages.35 The band typically shows proximal convex border. Onychoscopy of the distal edge of nail plate shows a characteristic keratotic subungual mass.35 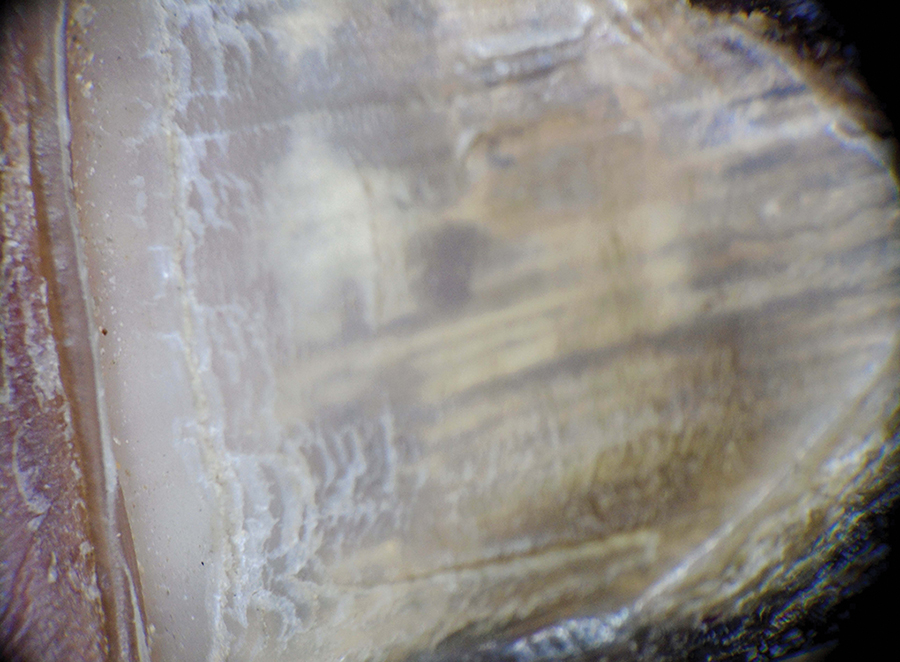 Onychoscopy shows presence of white scales and diffusely distributed dotted vessels.37,38 The characteristic feature is the presence of whitish halo around these vessels.38 The glomerular vessels seen in Bowen' s disease at other body sites are typically absent. Another not so common feature is periungual pigmentation, which is described as pseudo-Hutchinson sign.39 Pseudo-Hutchinson sign in onychoscopy is described in two other settings: Nail bed hyperpigmentation reflecting through transparent nail folds and nail matrix hyperpigmentation reflecting through transparent nail folds.39

Clumps of homogeneous red lacunae divided by white meshwork like septal wall are visible on onychoscopy. Telangiectasias are also reported on the adjacent skin (Fig. 17).40

Onychoscopy of periungual wart with thromboses vessels visible as red dots. Note the extension of wart beneath nail plate, a distinct advantage offered by onychoscopy (10×). 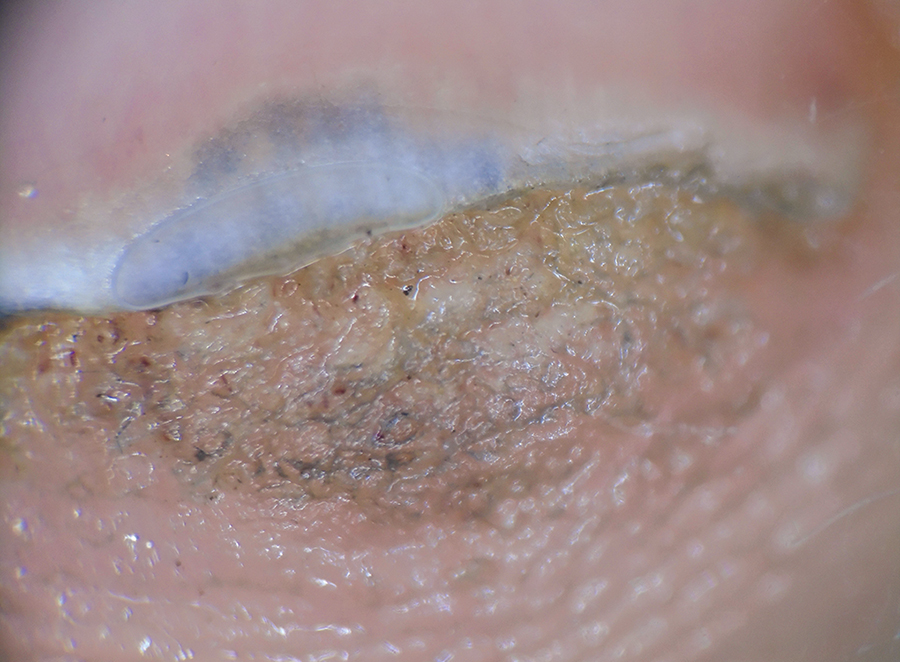 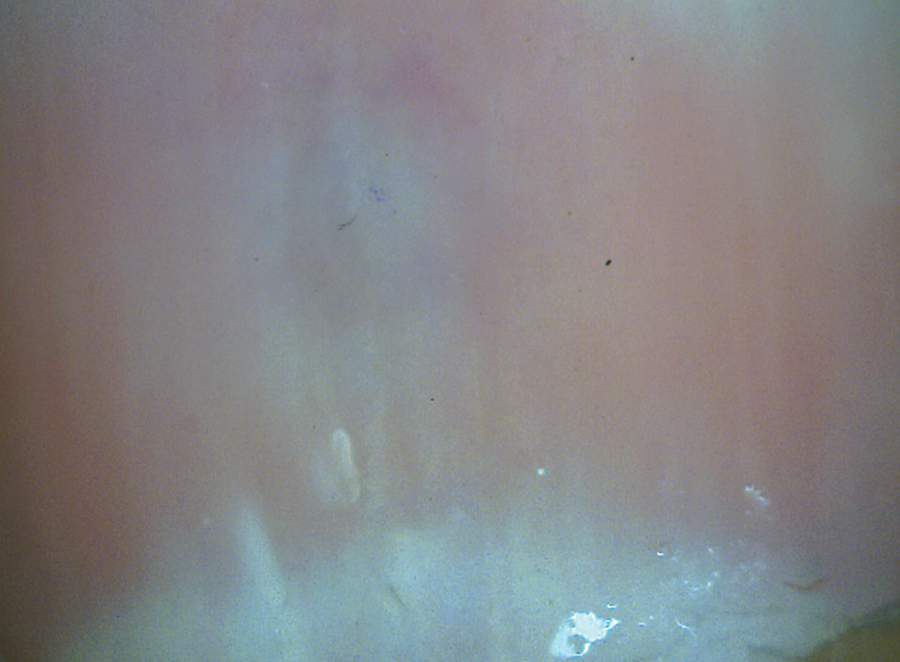 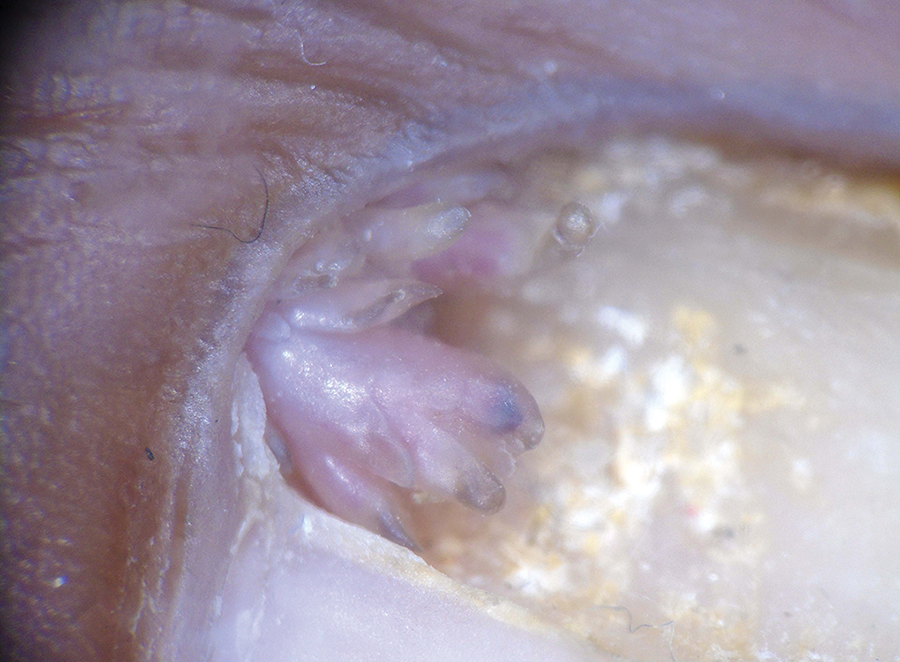 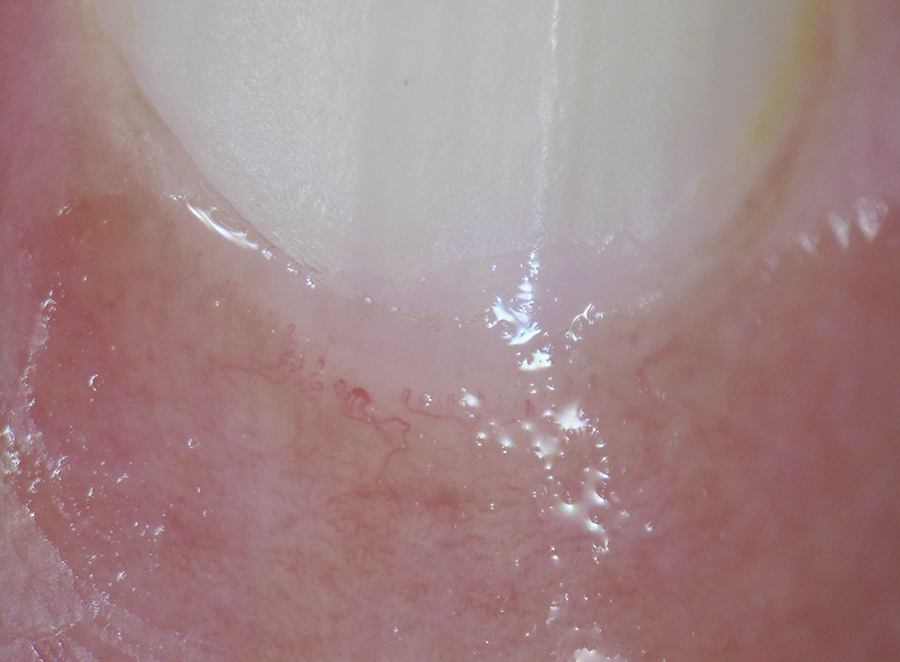 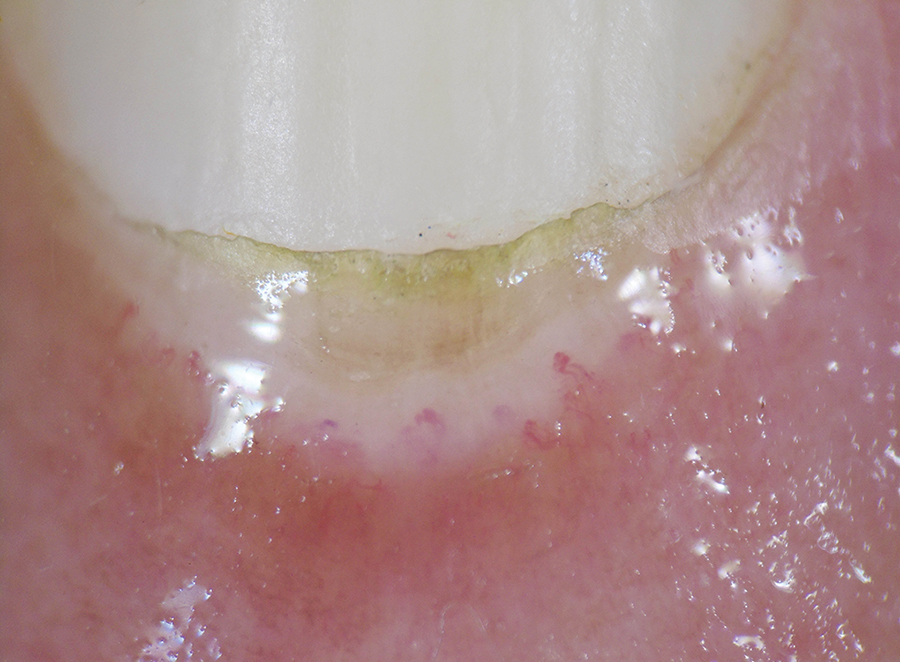 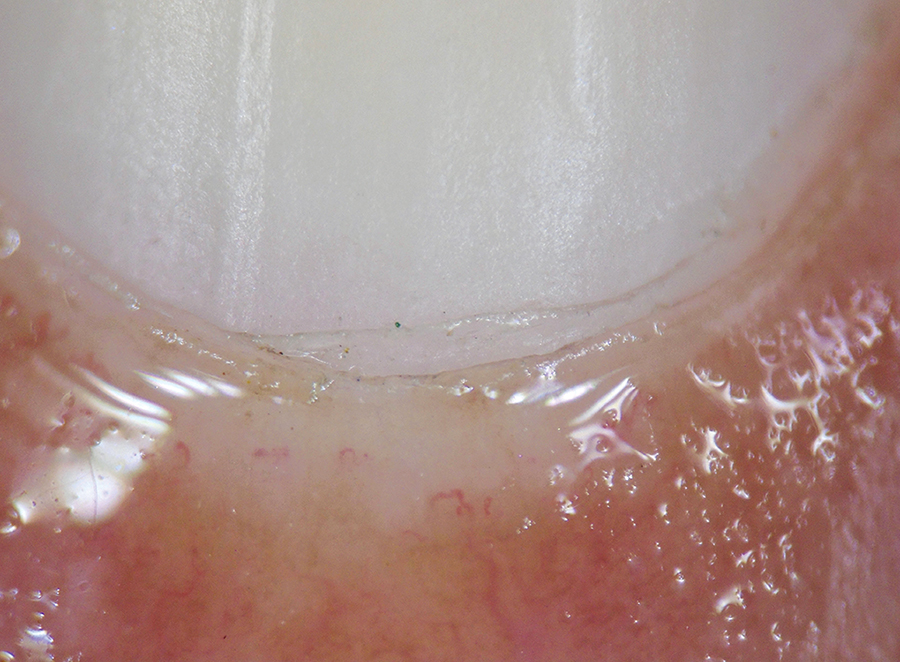 As seen at other body sites, reddish homogeneous areas with white rail lines are the typical onychoscopic features.41

When no pressure is applied on myxoid cyst while doing onychoscopy, it shows a vascular pattern in the form of linear, branched, or serpentine vessels. Application of pressure blanches the vascular pattern and the lesion only shows translucent bright white areas.42,43

Three different patterns of NFC changes have been described with SSc:46

Dermatomyositis is only the second CTD that shows the most consistent NFC abnormalities. The pattern observed in DM resembles SSc to a large extent and includes the presence of two or more of the following characteristics in two or more nail folds, viz. capillary dilation, twisted enlarged capillaries, loss of capillaries, bushy capillaries, disorganization of capillary architecture, and microhemorrhages.47,48

Capillary dilation and loss of capillaries are more commonly and severely reported in DM as compared with PM.47

Onychoscopy has become an established and important diagnostic tool for nail disorders with fast expanding indications. The onychoscopic criteria for majority of the inflammatory and infective nail diseases are evolving at a fast pace. With an increasing interest in the so far neglected nail disorders, it has become imperative for all clinicians to be familiar with the science of onychoscopy to supplement their primary clinical skills.