Bowen's disease (BD) is a form of squamous cell carcinoma in situ, which was described by John T Bowen in 1912.1 It usually presents as an asymptomatic, slowly growing erythematous scaly patch or plaque with well-demarcated irregular border.2 It may be pigmented or nonpigmented. The most common sites affected include the head and neck followed by the extremities.3

We present here a case of rare variant of BD diagnosed by dermoscopy and confirmed by histopathology.

A 75-year-old female, farmer by occupation presented to us with a painless raised lesion on the dorsum of right hand since the past 5 years. The lesion was asymptomatic with gradual increase in size over time. There was history of working in the farms for a long duration with exposure to pesticides as well. She had applied topical steroids over the lesion with no response. No systemic features like weight loss, fever, and malaise were present.

On cutaneous examination, a 3×4 cm multicolored pigmented crusted plaque with well-defined margins was present on the dorsum of right hand (Fig. 1). Skin lesions were not present anywhere else on the body. No regional lymphadenopathy was present. We kept a differential diagnosis of BD and actinic keratosis. 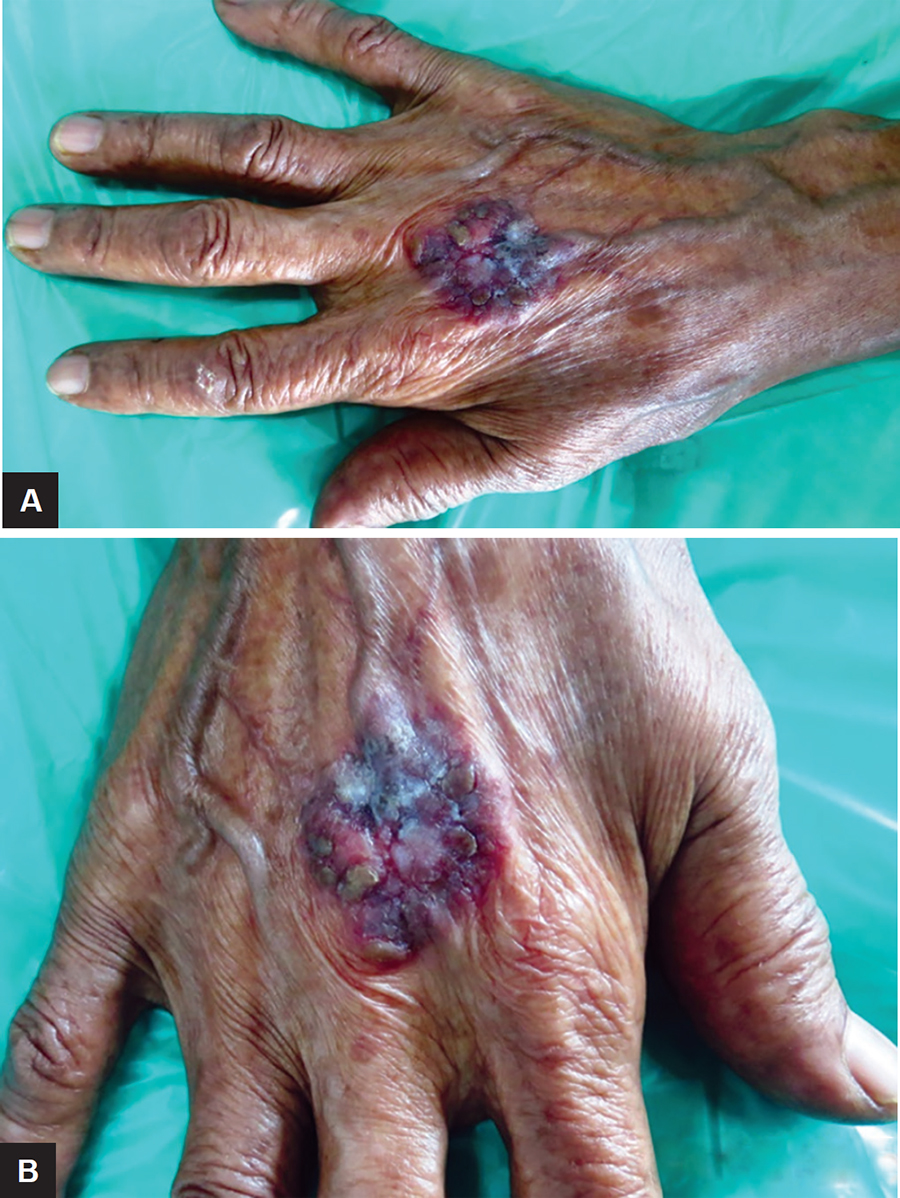 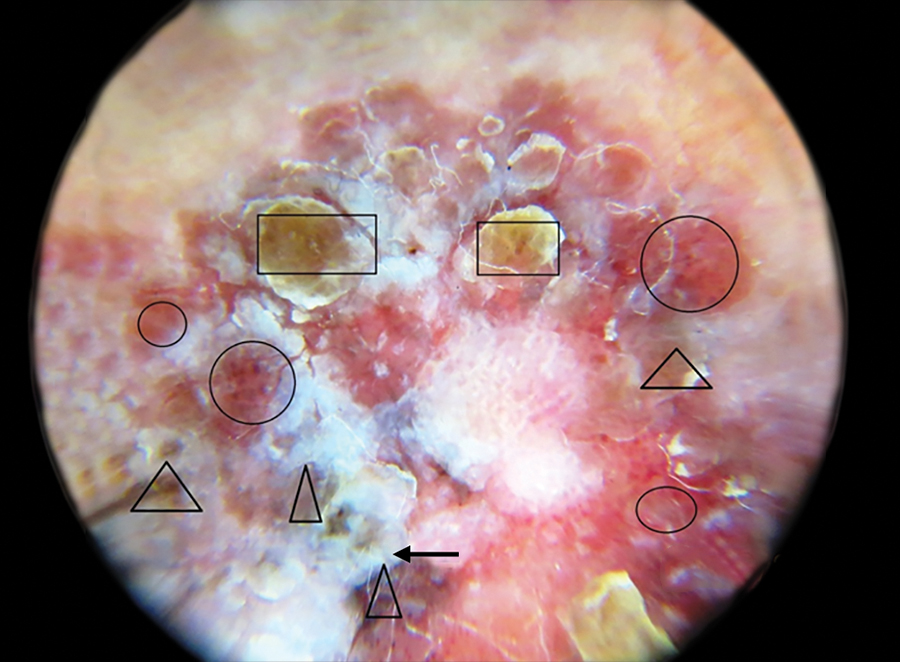 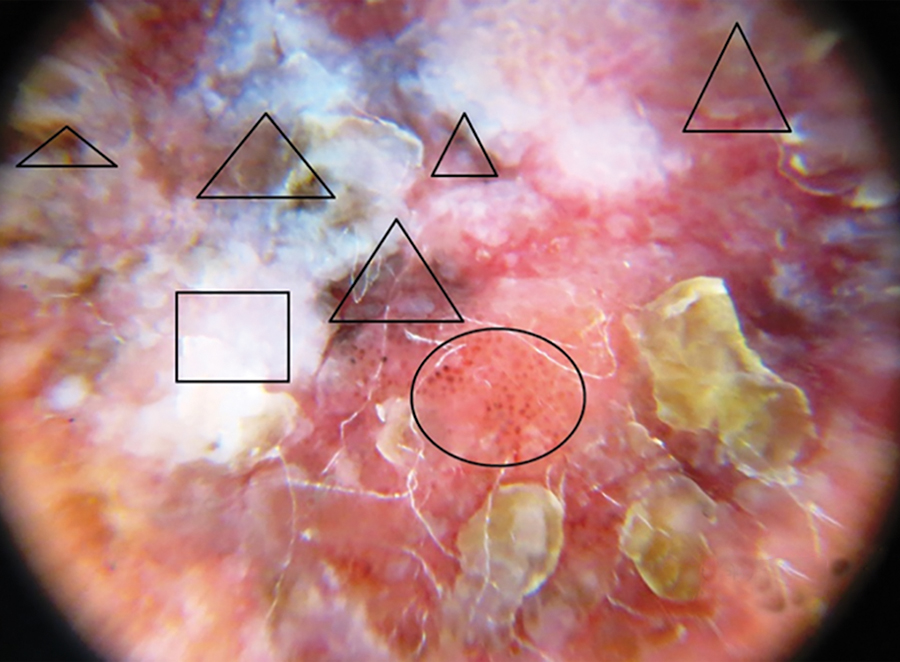 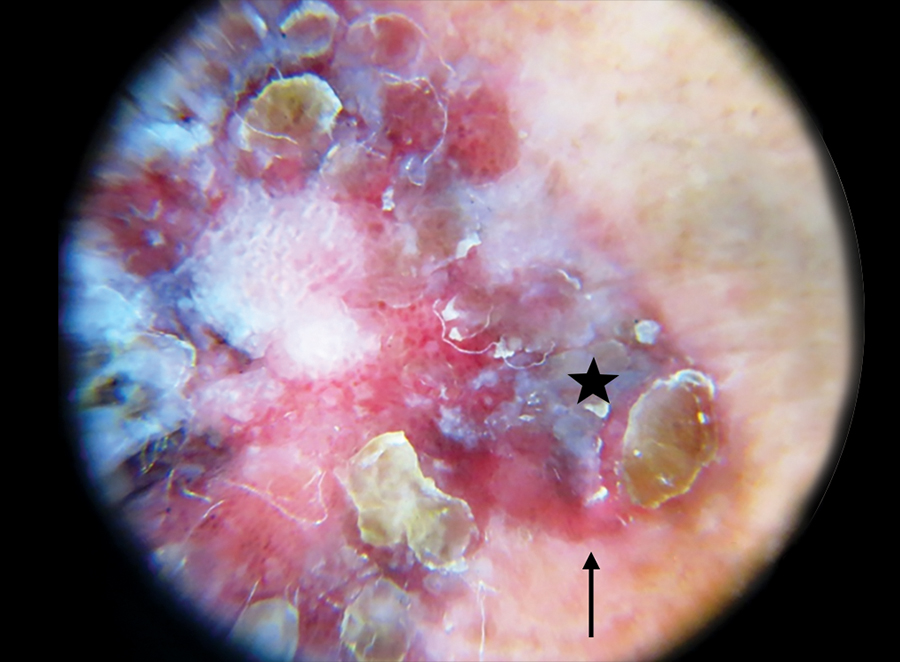 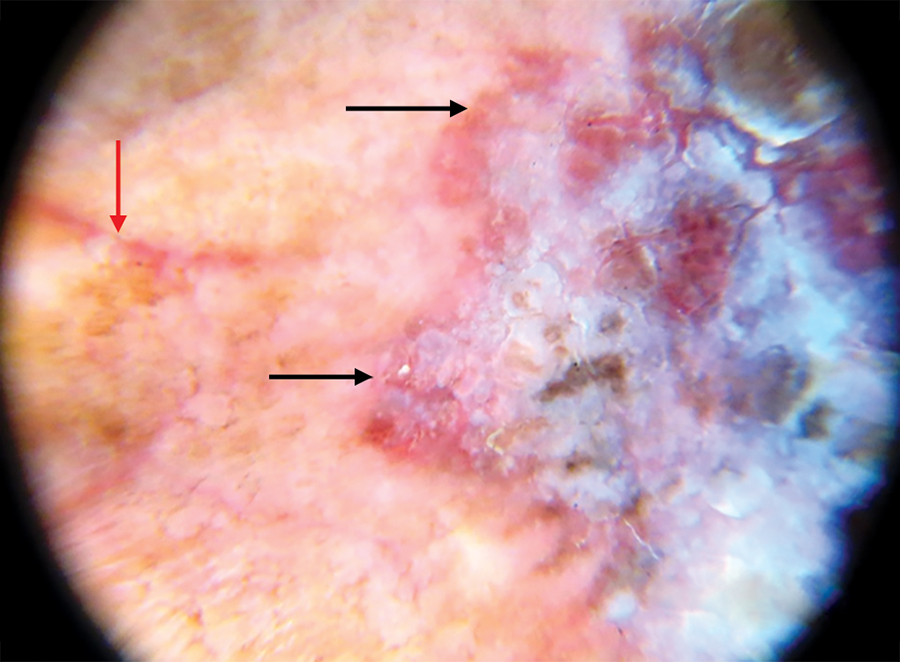 Dermoscopic features of actinic keratosis, such as enlarged follicular openings, perifollicular white dots, or strawberry pattern were not seen in our case.

The stratum cornuem revealed parakeratotic cells with atypical, hyperchromatic nuclei. Acanthosis with elongation and thickening of the rete ridges was present. Throughout the epidermis, the cells were in complete disorder, resulting in a “windblown” appearance. On higher magnification, cells appeared highly atypical, showing large, hyperchromatic nuclei confirming the diagnosis of BD (Figs 6 to 8).

Thus, our final diagnosis based on clinical, dermoscopic, and histopathological examination was BD (pigmented variant). A complete excision of the lesion was done.

Bowen disease is a relatively common tumor that is considered to be an intraepidermal squamous cell carcinoma.8

Clinically, BD is a slowly enlarging well-demarcated erythematous patch or plaque with scaling and crusting. The pigmented forms of this tumor are uncommon (less than 2% of cases).9 It is commonly located on the head and neck and extremities. The risk of progression into an invasive carcinoma is 3 to 5% in extragenital lesions and about 10% in genital lesions.10

In addition, in pigmented BD small brown globules regularly packed in a patchy distribution (90%), and structureless gray to brown pigmentation (80%) are observed.4 Pigmented BD has to be differentiated from other pigmented lesions. In our case, actinic keratosis was the closest differential, which was ruled out by dermoscopy (Table 1). 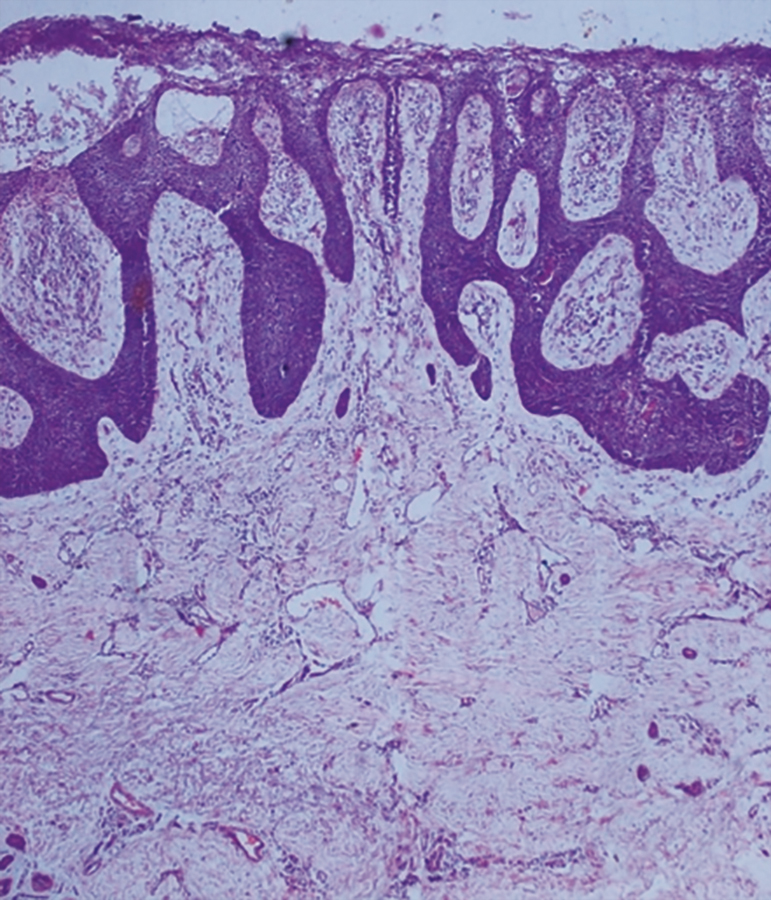 The 10× view showing cells in complete disorder in the epidermis, resulting in a “wind-blown” appearance 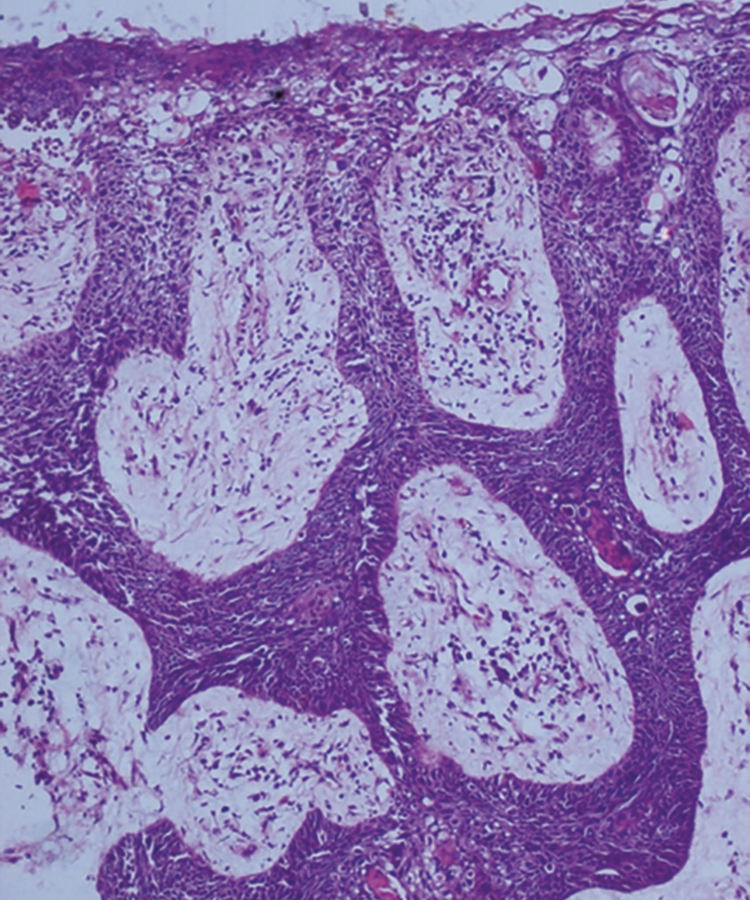 On magnification 40×, atypical cells with hyperchromatic nuclei are seen 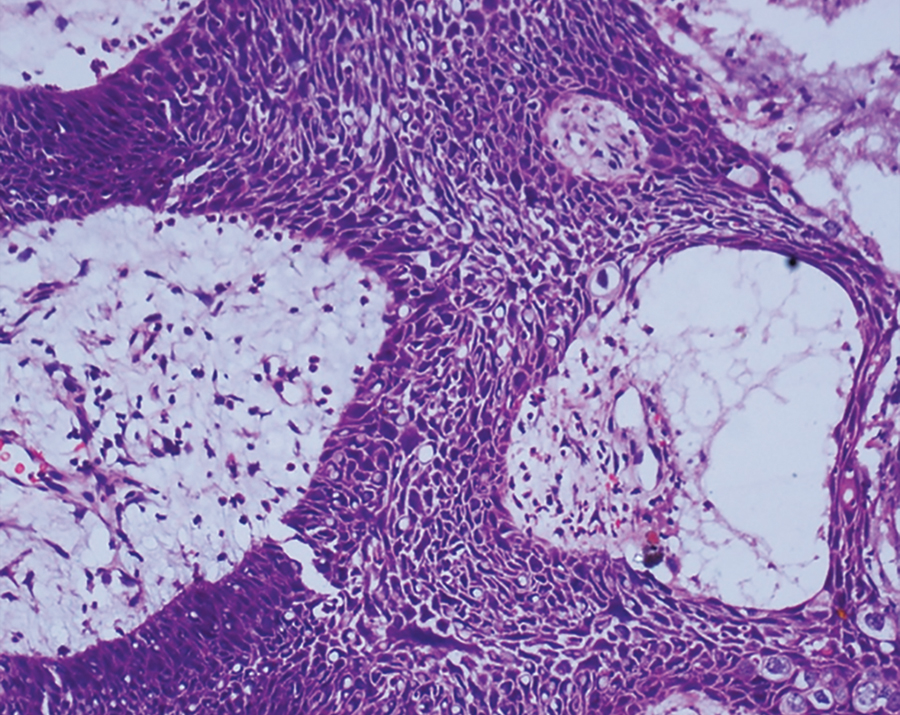 The characteristic dermoscopic findings of each type are glomerular vessels, whitish scale, and a pinkish-white network in CBD. Structureless pigmentation in addition to findings of CBD was seen in PPBD and pigmented streaks in PBD.11

Bowen's disease is an intraepidermal carcinoma; it is to be differentiated from actinic keratosis, seborrheic keratosis, and invasive squamous cell carcinoma. A thorough knowledge of the dermoscopic features and subtypes of BD may go a long way in its diagnosis.